1 The Grand Tour Is Back With Season 3, First Episode Airing On January 18th

5 Nissan Leaf Makes a Cameo in Disney's "A Wrinkle in Time"
Car video reviews:
Up Next

With only a few days left until Christmas, fans of the Men in Black movie series got their present, as Sony Pictures uploaded the first trailer of the spin-off by nearly the same name starring Tessa Thompson, Chris Hemsworth, and Liam Neeson.
9 photos

The nearly 3-minutes long clip left us with the impression that at least from the gadgetry point of view the movie will rise to the success of its predecessors. Sure, the characters may seem out of place – especially Neeson, for those who grew up with Will Smith and Tommy Lee Jones as the agents with an initial for a name - but at least all the high-tech gizmos seem to be there still.

With at least part of the action taking place in London, this Men in Black International movie looks like one featuring James Bond out for alien blood. Only instead of 007, his code is M, and instead of being a man, he’s a she.

Partnering to take down whatever it is decides to step over the London Bridge, Thompson and Hemsworth use a variety of means of transportation and weaponry. Their preferred ride seems to be a Lexus RC F that can fly at the press of a big red button, a nod to the Ford Crown Victoria used in the original movie.

When chasing bad aliens, or runnig away from them, we couldn’t tell, the dynamic MIB duo uses a flying motorbike of sorts, that hovers near ground level and also can fly way up into the air.

The most spectacular of all the machines in the new MIB, or at least in this trailer, is a Jaguar XJ that doubles as a high-tech weapons rack.

There are three shiny-blueish pistols hidden in at least one exterior mirror, one shotgun thingy coming out of the rear bumper and, most spectacular of all, the hubcap that can be detached and turns into a drum mag for shooting light projectiles out of a futuristic Tommy Gun.

There’s probably even more gadgetry in this movie, and we’ll get to see it all in June when the flick hit theaters. 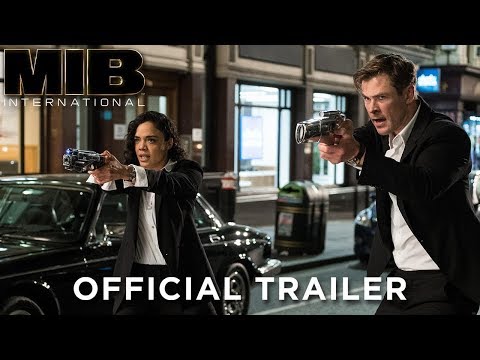