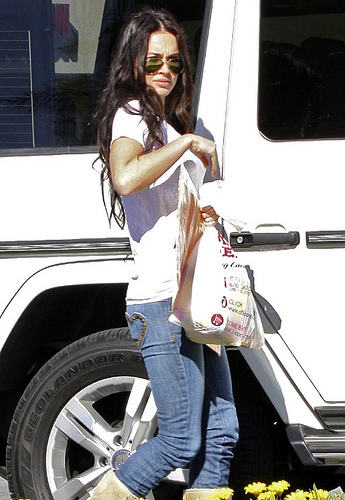 Since we have been speaking about the cars female stars like to drive, we can not simply ignore Megan Fox from the equation even if she's not driving... her own car.

Well, the 22-year-old actress and model has been spotted by the paparazzi driving her fiancé's SUV and the guys from Celebritycarsblog.com managed to get their hands on the precious photos.

Now, in case you don't happen to be among the Hollywood star's friends, we bet you won't guess what car she was driving when apparently she was doing some shopping. So, judging by the photo, we can say Megan Fox is very proud to be driving a white Mercedes G-Wagon which happens to belong to her future husband, the former Beverly Hills 90210 star, Brian Austin Green.

But since the two are planning to get married despite the rumors of breaking up, we take it as a nice gesture coming from Brian who is sharing his entire fortune with his future wife. Isn't that cute?

Megan Fox is best known to the public for her roles on the television series “Hope and Faith” and in the 2007 live-action film “Transformers”. As a model, Fox has been featured in the men's magazines FHM, GQ, and Maxim. In fact, FHM voted her the Sexiest Woman in the World in 2008.

As for her engagement to Brian Austin Green, Megan Fox consider herself a very happy woman as she told People that her future groom-to-be is "a really great person" adding that "when I'm not working, I'm at home [with him] all the time." In fact, he is such a great person that he allows her to drive his SUV. Would it be because Brian considers himself uglier than his future bride and therefore likes to spoil her as a minor compensation to this “problem”?