3 Go to War on Overgrown Grass With the Tank Lawn Mower, Has Working Cannon

Next time you’re feeling discouraged and contemplating giving up whatever it is you’re doing after minutes of trying, remember this: this Texas man worked 20 years on his dream custom car.

Meet the Trucktopus, Steve Francis’ street rod that took two decades to build, boasts eight wheels and an incredible body that is nothing like the original Isuzu truck it started as. Francis has been into minitrucks since he was a kid, and he started attending car shows as a young man.

Right off the bat, he says in an older Barcroft Cars interview (video below), he knew he needed to come up with something truly special to stand out from the crowd. It would take him several long years until he found out what that was, and some years more to complete the project. In all, Francis estimates he worked on the project for 20 years, though he was never alone.

“I always like to be different and I don't like to leave anything stock. It’s taken me about 20 years to customize the truck to the state it’s in now, so the man-hours on this vehicle are totally epic,” he says. “I did have a lot of help customizing the truck. It’s been to lot of different shops, a lot of different people have had their hands on it.”

The Trucktopus (a self-explanatory name) is a three-axle, eight-wheel, 21-foot (6.4-meter long) truck that stands out for a little bit more than just the fact that it has more wheels than a regular car. It’s been shaved and modded, lowered and lengthened, and customized within an inch of life, to the point where you can hardly tell what car it was before.

Speaking of which, it was a 1989 Isuzu LS SpaceCab, which Francis bought as a weekend vehicle. While used as such, Francis kept the four-cylinder engine it came with, but he’s since replaced it with a small-block Chevy 350ci V8 and a 700R4 transmission. He added 20-inch (51-cm) rims, suicide doors, side mirrors from a Harley-Davidson so as to not distract from the overall sleep appearance of the car, a 1997 Rodeo truck grille, Rodeo bumpers and lights, and a sliding ragtop. He also dropped the body by 3 and a half inches (8.8 cm) and added airbag suspension.

Over the course of two decades, the Trucktopus has seen many incarnations and, somehow naturally, started out as a six-wheeler codenamed “Project Six-Pack,” according to a 2010 feature in TruckTrend. This is the definitive form and the one that’s been getting Francis the attention he was so eager to get.

One of the most recent additions is in the extended bed of the truck, under two custom tonneau covers: two 32-inch (81.2-cm) LCD screens with the hidden batteries. Inside the cabin, there is almost nothing else but speakers. Against the leather / suede seats and dash and the pointedly minimalist interior, four 12-inch (30.4-cm) JBL subwoofers, two JBL audio amps, and an alpine head unit draw all attention onto themselves. Francis doesn’t say why this obsession with sound and video, but one can easily imagine The Trucktopus isn’t just a monster of a street rod but also quite the party animal.

Francis stops short of revealing an estimated total cost for his build, saying his wife will be watching the segment and he doesn’t want to get in trouble. Over the years, he’s never revealed a figure when talking about the minitruck, so either he lost count or he really doesn’t want that to take away from the merit of the build.

Because this is the result of so many years of hard work, Francis only takes the Trucktopus to car shows and the occasional ride for pleasure. He makes sure to never go faster than 50 mph (80 kph), though, when that happens.

“The actual drive of it, it rides really good because it is on six airbags and it’s like driving a limo so you have to remember that you got a lot swinging around behind you,” he says. “Driving this thing is awesome because you get all the looks and the stares, the waves, the thumbs ups. It definitely gets a lot of attention.”

At the end of the day, 20 years of tinkering and who knows how much money spent on it were worth it. 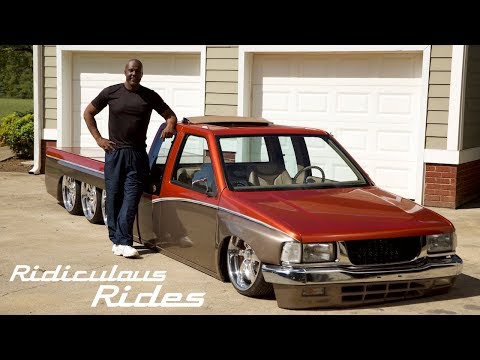