3 Meet Solid CRS-01, the E-Bike Concept That Looks Like It's About To Snap Your Fingers Off

4 This Futuristic 3D-Printed Thingy Is the nFrontier UILA, a Car and e-Bike Hybrid

5 The "M" Rapide Is Angell Mobility's Idea of a 21st-Century Two-Wheeler, and It's Electric
Editorial

Meet the Alpha Neo, a Second Gen Model of the First Hydrogen e-Bike in the World

Elena Gorgan
Hydrogen energy is theoretically the greenest form of energy, but despite the latest advances, there are still many hurdles to overcome to make it widely available, safe and precisely as green as it can be. If you’re betting on hydrogen as an alternative to fossil fuels or other types of energy, you’re probably going to love the Alpha Neo.
7 photos

Alpha Neo is a hydrogen e-bike. It’s actually the second generation of the world’s first hydrogen-electric bike, the Alpha, from French company Pragma Mobility. Alpha came about in 2017, with successor Alpha Neo presented to the world in the summer of 2021, with a slew of improvements and a reduced price.

In late November this year, Pragma Mobility announced a new plan to make the Alpha Neo more accessible. Say what you will about the benefits of having a hydrogen bike – and Pragma Mobility does say a lot on the topic - but they mean little if pricing is prohibitive. To counter that, the company introduced a long-rental scheme for the Alpha Neo, where you pay a deposit upfront and then a monthly fee.

So what does this mean exactly? It means that the Alpha Neo, which retails for €5,690 ($5,996 at the current exchange rate) and is now available for pre-order, can now be had for a €1,700 ($1,791) deposit and monthly payments of €79 ($83) afterward. It’s still incredibly expensive, to say the least, but that’s a price cut of nearly €2,000 ($2,107) over its predecessor. More importantly, if you believe Pragma Mobility, it’s the promise of green, efficient and convenient personal mobility.

The Alpha Neo is an electric bicycle like many others, with the difference that it’s zero-lithium. There is no battery pack for the rear hub 250W motor; even the buffer battery on the predecessor has been removed and replaced with supercapacitors. Instead, the frame houses a hydrogen pack with a small 480 W fuel cell. The hydrogen tank stores 67 grams of hydrogen under 300 bars (4,351 PSI), which is not swappable but is removable for easier servicing.

Range is estimated at 120 to 150 km (74.5 to 93.2 miles), depending on riding mode, payload and terrain. Pragma Mobility insists that it’s an improvement over current e-bike models, and we’ll return to this statement a bit later. Operation is possible between -10°C / 14°F and +60°C / 140°F, and almost without dead times, because a full charge is achieved in under two minutes.

Quick charging times and extended range are presented as the highlights of the Alpha Neo, but it goes without saying that both are relative. For that quick charge, you have to have a hydrogen fueling station nearby, and the current infrastructure is incipient, to say the least. As for range, you can get comparable numbers from several mid-range e-bikes, or even from a low-entry e-bike if you’re willing to carry an extra battery with you.

The Alpha Neo is powered by a 250 W motor that peaks at 350 W and 36 Nm of torque, and cuts off at a maximum speed of 25 kph (15.5 mph), in accordance with EU regulations. U.S. readers will be the opposite of impressed at that. The motor is paired with an automatic five-speed gearbox, torque sensor, and hydraulic disc brakes. Standard features include automatic power-on front and rear LED lighting, mudguards, and central stand.

“More efficient, more ecological, more competitive, it is the embodiment of a major technological evolution in light hydrogen mobility,” Pragma Mobility says of the Alpha Neo. “Its virtuous design model is part of our circular and local economy system.”

Those are some big words for what is a standard electric bike in terms of specs (plus with a hefty weight of 30 kg / 66.2 pounds), with the price tag of a high-performance machine or a luxury product.

It could be a luxury product alright, if you're looking for bragging rights. But the “get” is that Alpha Neo, like predecessor Alpha, is not designed for individual ownership but rather for fleet operations, where charging times and extended range, even by a little, can make a difference. It’s true, you can charge an e-bike at home these days in just two hours, but if you run an entire fleet of them, it’s ideal if you can do it in under two minutes. You could splurge on it even if you're no fleet operator: as long as you have the money, no one will tell you what to do with it. 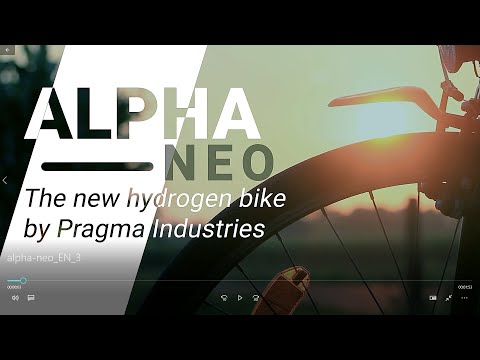 Photos in the gallery show the Alpha Neo and its predecessor, the Alpha.