1 Modern Mountain House, Once World’s Most Expensive Tiny, Is How You Downsize Luxuriously

2 The 1913 Earl Travel Trailer, the Oldest Trailer in the World, Is Still Around and Awesome

3 1961 Holiday House Geographic Model X Was the Trailer for the Rich, a Futuristic Unicorn

5 This Fully Updated 1973 Airstream Is the Perfect Home Away From Home
Car video reviews:
Coverstory

When it comes to collectibles, a classic is always a winner. A rare classic is even more desirable, but good luck getting your hands on one like this – the very hard-to-come-by camper trailer Hille Ranger, best known as the Ranger Camper Trailer.

The Hille Ranger is not just a very rare vintage camper trailer. It is also widely believed to be the first modern pop-up camper trailer, so it may very well have laid the grounds for the ones on the market today. As if that weren’t enough, this Camper Trailer is also the first of its kind to use fiberglass and polyester resin for the body, and to offer the comforts of home in a footprint that is half the size of the trailers of the day.

In all respects but one, the Ranger was well ahead of its time. Eventually, it was that one aspect it failed to consider that led to its untimely demise: pricing. It was too expensive for those days, and specifically for a product whose use was limited only to the warmer seasons. Still, it was an accomplishment and a stepping stone in the history of trailers, and it deserves due attention.

The Hille Ranger was the result of several years of work with the goal of developing the ultimate camping companion. As such, it had to be lightweight yet resistant, easy to tow yet spacious enough to fit and feed an entire family. Walter E. Hille of Hille Engineering first applied for the patent on March 15, 1954, and the patent text (also available in the PDF attached) offers a clear indication of the kind of attention that went into building it.

Both the lower and the upper half were made of fiberglass and polyester resin, and the roof could be raised by means of a hand crank that activated a system of pulleys. This way, the trailer was compact for towing, but offered standing height at camp. Once deployed, canvas “walls” could be set up in whichever way campers wanted, to get full or partial enclosure. The canvas had windows for natural light and cross ventilation, and offered some protection against the elements. Dealer brochures at the time also mentioned the possibility of adding mosquito nets as an optional, or even a foam insert to turn the twin beds into a queen.

The Ranger was 12 feet (3.6 meters) long and 82 inches (2.08 meters) wide. With the roof raised, it offered a height of 6.3 feet (1.9 meters) and sleeping for up to four people, with cooking facilities in the front. Over each wheel was a bed that could sleep either an adult or two children, with later models adding a removable table between them, so the bedroom turned into a dining room during the day. The highlight was the pull-out dresser-drawer-type bed that ran the width of the trailer at the rear, and could sleep another adult or two children at night, and double as extra storage during towing.

Additional storage was available above, though it was reserved for smaller items. The kitchen was at the front and consisted of an L-shaped counter that integrated an ice box and a sink with a water pump, a two-burner cooker, some cooking surface and cabinetry for storage. It wasn’t much by today’s standards but, considering the trailer’s limited seasonal use, it was enough for a short family vacation in the ‘50s.

The trailer weighed 1,100 pounds (499 kg) and was advertised as dent-, rust- and mold-resistant, with the mention that it was only dent-free “within limits.” Still, brochures highlighted the fact that it would handle better in scenarios that would leave metal-built counterparts in irreparable conditions.

Features included a small 110-volt light with a plug-in for electricity in the front, and a 6-volt light at the rear, the water tank in the nose, and ‘54 Ford taillights. The first-year model of the Ranger featured a spear over the wheel well, which disappeared once it changed its name to Sport Ranger.

And that brings us to the short production life of the thing: Hille Engineering built it for a couple of years; by 1957, it was being produced by Minneapolis, MN-based Forlyn Manufacturing Co., under the name Sport Ranger. In total, only some 200 units of the trailer were made, of which less than 40 are believed to have survived.

As for the probable cause of the early demise, it’s all down to pricing: when it was introduced in 1954, the Ranger came with a sticker of $1,500, which is close to $16,000 in today’s money, and much more than what people were willing to pay back then for a seasonal camper trailer. Today, when one such item does pop up on the specialized market, it’s asking less, because most are in need of restoration. For instance, a mostly-original ‘54 model that was once was on display at the Murphy Museum in California, was selling in February 2021 out of Florida for $7,500 OBO.

But for lovers of vintage trailers who are willing to put in the work, the Ranger remains a highly desirable collectible. This Ranger Registry shows how beautiful these units are after some TLC. Still functional, too. 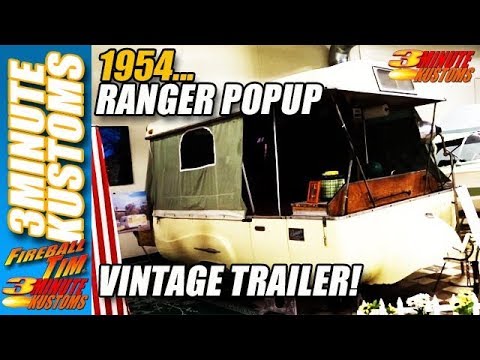