Meet SQUID, the Tentacles of the Law 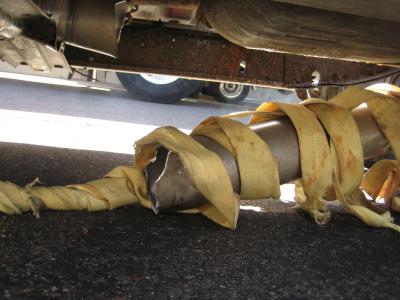 Since bullets, barriers and spikes often proved to be quite useless against fugitives who run away on the highway like Michael Schumacher on a circuit in his good days, a group of scientists designed what seems to be the revolutionary tentacles of the law. No, it's not a super-hero like the ones seen in cartoons, it's actually a super-SQUID that can stop any car without any real damage or danger. The Safe Quick Undercarriage Immobilization Device or, if you prefer, SQUID, is based on a 1.5-foot-wide disc that must be deployed by a police officer once the fleeing vehicle is a half second away.

What's interesting is that SQUID was really inspired by a sea creature, as the Engineering Science Analysis explained. And more importantly, it acts somewhat similar to a real squid as it aims to block the wheels using its sticky tendrils.

“We must make it lighter,” says Mark Kaczmarek, the S&T SQUID program manager. “Also, more affordable, so it becomes the stopper of choice, regardless of budget.”

“SQUID was inspired by a sea creature and a superhero,” added ESA president Martín Martínez.

The manufacturers explain that an used SQUID can be easily recovered and refurbished for later use so the costs are fairly low. However, they admit the whole assembly has to be a bit cheaper in order to allow the authorities to purchase the product and use it on a regular basis. But all these aspects should be improved by 2009, according to the manufacturer.

And beside all of these, scientists say that such a system should be able to stop any type of vehicle, no matter its weight and the speed. At this time, it has proved its efficiency only on a pickup truck at 35 mph, but the goal remains a 5,000-pound vehicle speeding at 120 mph.