1 Bigfoot #5: The Tallest, Widest and Heaviest Monster Truck That Ever Was

2 The USS Compensator Is a Bonkers Lincoln Monster Truck Limousine

5 This Is How Europeans Think Cars for the U.S. Should Look Like
Coverstory

Go big or go home. Or go to White Hills, Arizona to experience a ride in the Sin City Hustler, the world’s longest monster truck as of 2016.

Monster trucks are called just that because they’re overall bigger and more impressive than regular trucks. On this consideration, the Sin City Hustler is a monster of a monster truck, measuring almost as much as a bull elephant. It is not road-legal of course, but that doesn’t make it any less impressive.

The Hustler has been around for some years, securing a place in the Guinness Book of World Records as the longest ever in 2016. It has remained undefeated since then and, despite being listed for sale at some point, it remains the property of Brad and Jen Campbell of Big Toyz Racing.

The Campbells, former monster truck racers themselves, built the Hustler on their own. The project was expected to take only a few months but ended up lasting nearly 15, because Brad set out to do everything by himself, by hand. The only help he had, according to Jen in an older interview you will find at the bottom of the page, is from employer Mike. Fun fact: this is probably the same Mike reality show fans will recognize as Sugar Bear from Here Comes Honey Boo Boo.

After 15 months, starting with the body of a “ginormous” limousine, the Hustler was born. Other accounts note that the build used the body of a Ford Excursion SUV, but we’re going with Jen’s version that an actual limo was used.

The design, the chassis and the roll cage were all done in-house. According to the Campbells, this thing is practically indestructible.

It rides on 66-inch (1.67 meters) all-terrain flotation tires from Firestone and features eight nitrogen-filled shocks, custom suspension and driveline brakes. This makes it stable even on the roughest terrains, which is the goal since it’s being used as a tourist attraction, offering rides to whoever is looking for a quick adrenaline fix.

Indeed, just outside Vegas, the Hustler offers an experience that even the hardest-partier won’t be able to forget. It may not be road-legal but it can still be driven through the canyons and over obstacles, so Jen and Brad designed a route that aims to offer extra thrills to the paying customer. About 12 of them at once, which is the seating capacity inside this monster truck, in addition to the driver.

Currently, the Hustler is offering something akin to limo services, though perhaps “experience” would be a more suitable term. Every ride only lasts for about 5 minutes or so, but Jen swears it’s enough to satisfy tourists and justify the ticket price. As a former monster truck racer herself, she says without modesty that the course is “awesome.”

Access for the passengers is done through the rear, through a remote-operated hatch similar to those found on airplanes. Another one is placed at the front, for driver access, though the doors and power windows of the original car are still functional. The driver basically climbs up into the cabin through the floor.

Tourists are treated to a scant interior with certain Vegas elements of décor, but then again, they’re not here to lounge and sip champagne as they lazily chat about the weather. They’re here for the experience and the view, and that’s what they get. Safety is also important, so the airplane-style seats come with lap seatbelts. The Hustler can’t perform jumps with tourists inside, for insurance reasons.

A figure was never made public as regards the build but, sometime in 2015, the Hustler was briefly listed for sale. Unconfirmed accounts say that the asking price was of $1 million, which would explain why it’s sometimes referred to as the $1 million monster truck. 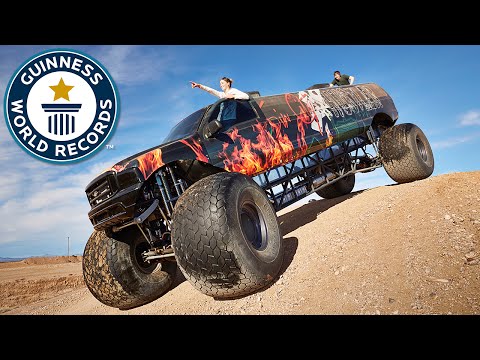 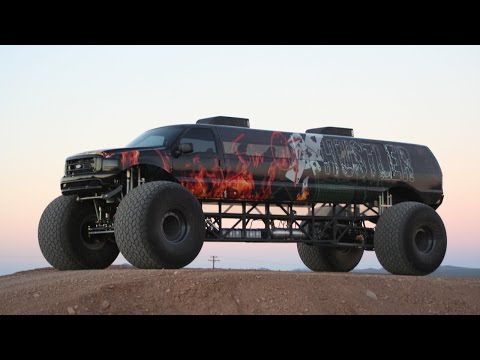