5 The Story of the Original Mustang: The First Three Production Runs (1964–1966)
Car video reviews:
Up Next

Affordable and stylish, the first-generation Mustang debuted in 1964 and went on to become one of the most iconic vehicles of all time. Initially available as a hardtop coupe or a convertible and later as a fastback, its main selling point was the ability to seat four. However, a small two-seat version was also built back in the sixties, and it managed to survive to this day.

Meet Shorty, the Oldest Surviving Mustang and the Only Fastback Two-Seater Ever Built

Years before the final production version started rolling off the assembly line, Ford was experimenting with different ideas for the Mustang project. It all started in 1962 when a committee of managers called the Fairlane Group gave designers the green light to create an affordable sports car that would appeal to younger buyers.

The first fully functional prototype was the awesome mid-engine roadster called Mustang I which became the perfect advertising tool for the Blue Oval’s upcoming nameplate but was eventually deemed too extravagant for mass production.

In 1963, stylists were instructed to come up with more conventional, front-engine two-plus-two designs and according to historians, 15 pilot-production cars were conceived. After settling on a final design, Ford built about 200 pre-production Mustangs that were used for advertising or crash testing.

Most of these vehicles would end up being scrapped, with only a few being converted to race cars. Only two survived in the initial pre-production specification albeit with converted VIN codes, while a third, chassis number 9 became one of the weirdest, yet fascinating Mustangs of all time.

Although Ford decided to go for the four-seat layout, it seems that the idea of offering a two-seat variant was still under consideration, so the company commissioned longtime suppliers Dearborn Steel Tubing (DST) to build one.

In the summer of 1964, DST received a convertible that was nearly identical to the mass-produced model and proceeded to transform it. The man in charge of designing it was Vincent Gardner whose resume included projects for the likes of Auburn, Budd, or Studebaker.

The chassis was stripped down to its bare bones and the original 108-inch (274.3 cm) wheelbase was shortened to just 90 inches (228.6 cm). Though the original front end remained untouched, virtually all other body panels were redesigned.

Gardner opted for a fastback coupe rear end but wanted to preserve as much of the original design as possible. Using sections from the stock bodywork along with wood and clay, he modeled the new panels directly on top of the shortened chassis. After applying the finishing touches, plaster molds were created, and the new panels were fabricated out of fiberglass. The original windshield was reused, but the door windows along with the concave quarters and the sloping rear window were custom-made out of Plexiglas.

Inside, most of the factory-spec components were used, except for the headliner and door panels which had to be refabricated. A carpet-covered luggage compartment was fitted behind the seats since the car didn’t feature an opening liftgate.

The suspension was also modified to reduce overall ride height. To do so, the front springs were trimmed while for the rear, lowering blocks were bolted on.

This one-off ‘Stang finished in an exquisite deep candy-apple red paint was christened Mustang III, since it was the second prototype created by DST after the Mustang II show car which was delivered to Ford several months earlier. However, it quickly earned the Shorty nickname for obvious reasons.

The conversion took about a month to complete, after which Shorty spent almost a year touring the country with Ford's Custom Car Caravan. The entire process was covered in the April 1965 issue of Custom Craft magazine and a month later, Motor Trend reported that the prototype would become a limited-production model.

In truth, Ford only envisioned this vehicle as a promotional tool and intended to scrap it but it never managed to do so. On May 2, it disappeared from DST's shop and a claim was filed with the Aetna Life and Casualty insurance company several days later. DST eventually received $10,000 for the loss and Aetna hired a private investigation firm to trace the car.

It was found several months later, and a lengthy investigation revealed Vince Gardner was the culprit. In an attempt to save his creation from the crusher, he hid it in a loft on top of a Detroit metal shop.

For reasons yet unknown, Gardner was never charged and although he didn't get to keep the car, he managed to save it. Aetna now owned Shorty so Ford couldn’t destroy it. The prototype was later bought by a company executive and in 1968, it was auctioned off by Hemmings, ending up in the hands of Bill Snyder from Ohio.

Snyder initially used the one-off Mustang as a daily driver but eventually decided to fully restore it. The experts at Capaldi Enterprises, in Willoughby, Ohio, were in charge of the project, and shortly after the restoration was completed, the car was featured at the 2013 Amelia Island Concours d'Elegance. You can admire it in the video below, posted on YouTube by Windwood.

Two years later, it was sold again, this time at an Auctions America event held in Fort Lauderdale, Florida. The winning bid of $511,550 came from collectors Howard and Roz Kroplick of Long Island, New York, the current owners of this unique piece of Mustang history.

More than half of a century after it was supposed to be destroyed, Shorty has not only survived but thrived. Although it was converted in 1964, it is one of three pilot versions built in 1963 that are still around today, and the only one that retains its original VIN code. It was manufactured prior to the other two models, which makes it the oldest surviving Mustang in the world. 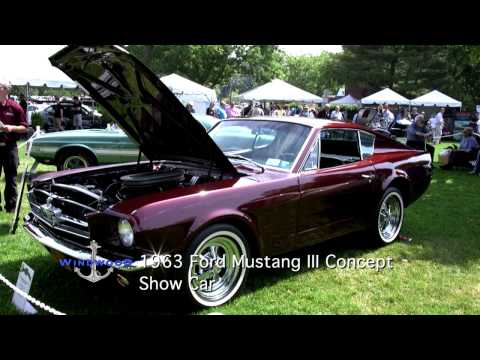