1 Only 50 German-Engineered, 3D Printed MCM EDT Luxury e-Bikes Will Ever Be Produced

According to scientists and eco-warriors, we’re on borrowed time on this planet, and it will all go bust unless we do something – anything, as long as we do it right away – to cut down pollution and slow down global warming. A wider adoption of electric vehicles, replacing internal combustion ones, would be one thing.

Then again, electric vehicles are not exactly affordable. In recent years, prices on electric cars have gone down considerably, but they’re still far from affordable to the average Joe and Jane, who make average salaries. An e-bike, in this case, would be the compromise solution, especially on the daily commute and short rides across the city.

That e-bike could be the Pave Bike from Pave Motors. Also dubbed Pave 1, it’s a newcomer to the market – in fact, it’s so new it isn’t even here yet. The pre-order books for the Pave Bike opened last month after the first batch of limited-edition units sold out. Pave Bike boasts of making EVs more accessible by making them more fun and easier to handle in the urban context and offering less hassle in terms of maintenance.

Pave Bike also claims to be the world’s first e-bike with blockchain connectivity, which means it will allow you to fully get into the NFT (Non-Fungible Tokens) game if that’s your thing right now. The idea of using blockchain technology to unlock and monitor the bike and share it is based on the idea that it’s a much more convenient alternative to using a key and a display for the same tasks.

Each new rider receives an NFT with the bike, a unique piece of digital code that will unlock and lock it, preventing theft. Said NFT can be stored inside the Pave+ app, which means you can access it even without an Internet connection. However, the bike will also be provided with a smartcard for situations where you might lose or misplace your phone.

This seems like a whole lot of trouble when there was always the key alternative, but the purpose for it is to offer a theft-proof vehicle. One of the reasons for the slow adoption of e-mopeds in crowded urban areas is the fear of theft, Pave Motors says in a statement.

Another upside to using blockchain technology is that it allows you to safely rent your e-bike to other members of the community when you’re not using it. You could do it for free, or you could do it in exchange for cryptocurrency, which would then act as a smart contract enforcer.

Created by brothers Nicolaus and Casper Nagel, Pave Bike aims to be a more stylish and sleek, but equally powerful alternative to a motorcycle. It’s basically powerful like a motorcycle but has the body of an electric bicycle, which allows for easy handling and storage. The battery locks into the frame, so you won’t have to carry it with you when you park.

Hydraulic brakes offer stopping power, and you get a suspension fork for comfortable rides, as well as a foldable seat made “from the softest foam we could find.” Extra foot support is provided for a passenger in the back.

With an aluminum frame, Pave Bike weighs 100 pounds (45 kg), to which you add the 22 pounds (10 kg) of the battery. While there’s no adjusting the seat or the handlebar, Pave Motors says that the e-bike is comfortable to ride “no matter your height.” It is also described as “the simplest and most intuitive motorbike – perfect for urban riding.”

Deliveries are limited only to the United States for the time being, but seeing how Pave Motors notes that it’s classified as an L1e-B vehicle in the EU, requiring an AM or B license, they probably won’t be so for long. Pricing starts at $108 a month or $3,900, with deliveries planned for early 2022. At almost $4,000, the Pave Bike is more of a premium product, unless you consider the possibility for monthly payments and take into account the promise that you will be able to monetize ownership of it. 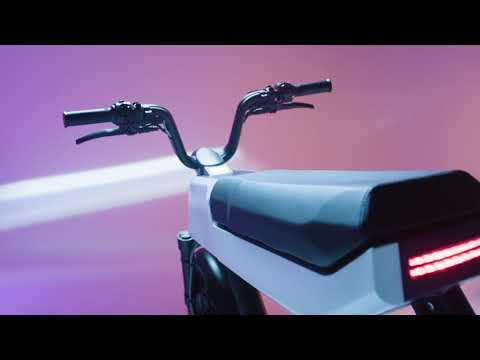