5 The Trotters’ Reliant Regal Van Up for Sale
Up Next

Home > News > Car Profile
Gabriel Brindusescu
If you’re in the market for a small, classy-looking, different and fun-to-drive car, nothing can beat the Morgan 3 Wheeler. Well, almost nothing can, because this Scorpion P6 comes at a lower price but with twice the fun.
9 photos

Scorpion Motors is a relatively new company based in Miami that aims to bring petrolheads supercar performances at a fraction of the price. And all these are being offered by their new P6 three-wheeler model.

The firm claims their P6 is actually the world’s fastest production three wheeler and looking at its spec sheet we tend to agree.

For around $26,000 you can get one of the limited production P6s which sort of look like an F1 car that’s missing the rear end. That’s because there’s only one chain-driven wheel there powered by a 600cc Kawasaki bike engine.

Power is not the only factor that dictates the performance here, as the P6 also comes with considerably wider tires while the whole thing weighs 730 lb (331 kg) because of its spaceframe construction and composite material outer shell.

There are two things wrong with it though - first is the fact that you don’t have room for a passenger and second, they are selling like hot cakes. All 2013 units have been sold and for a new one you have to place a preorder now. 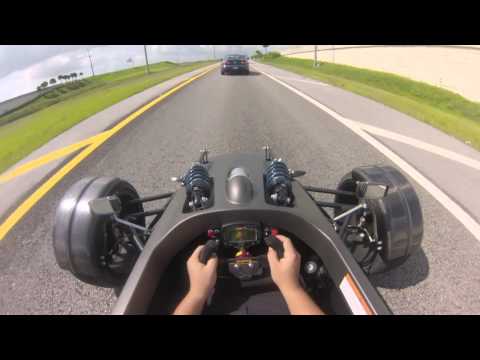