Home > News > U-turn
Ciprian Florea
Developed for the NASCAR Sprint Cup series, the Plymouth Road Runner Superbird and its Dodge Charger Daytona twin became two of the most terrifying musclecars to have in your rear-view mirror thanks to the series' new homologation rules for 1969.
1 photo
Nearly 2,000 Superbirds were built in 1970, with only 58 of them being fitted with the iconic 426 Hemi engine under the hood. These are among the rarest musclecars you can buy nowadays, assuming you have about $500,000 to spare for one that's in tip-top shape.

While these vehicles are resting in collectors' garages and museums, here's one that's flexing its V8 engine at the Texas Mile. It's not an original Superbird, but you shouldn't be disappointed. This modern-day winged warrior is one of the coolest Mopars ever built.

Dubbed "Grizz", this black bullet is a 2008 Dodge Challenger fitted with a Superbird body kit that can reach speed of up to 200 miles per hour (322 km/h). It has more than 1,000 hp coming from a supercharged 408 cubic inch V8 and it's a feast to the eyes and ears.

Some of you might have heard that this vehicle was stolen earlier this month. Fortunately, the "Grizz" was found a few days later and returned to its owner. The car was found in pieces, but the owner says it can be put back together as nothing was damaged and we hope to see it back in action really soon. Until then, enjoy the video below. 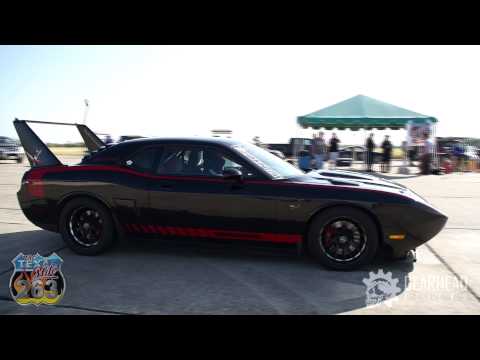