1 Got an Empty Beer Keg? Why Not Transform It Into a DIY Bicycle Cargo Sidecar?

5 DryCycle Is the Rather Undecided e-Bike With (Some) Car Functionality
Car video reviews:
Coverstory

Neither camping nor bikepacking is for everyone since they imply a lesser degree of comfort and a generally wider sense of roughing it up in the great outdoors. For bikepackers, here’s a neat thingy that brings as a bonus the fuzzy feeling of a job well done on your own.

Not everyone can afford or wants a larger car trailer, let alone a motorhome. Some could argue that the best feeling comes from riding on your bike wherever your legs (and/or battery) will take you, setting up (rudimentary) camp, and living more or less out of your backpack or whatever bags you can strap onto your bike for an entire weekend – or more, if you can take it.

The Foldavan is one step above regular bikepacking without verging into actual caravan territory, with the added bonus that you will have to build it on your own. Or, as WoodenWidget says, “You can’t buy ‘cool.’ You have to build it.”

Foldavan was introduced in 2014, and, to this day, it remains one of the world’s lightest and most compact bike trailers and one of the most creative projects to come to light on the market two-wheelers. It’s not just the fact that you have to build it yourself that makes it stand out, though let’s agree from the get-go that it helps: Foldavan is also light and sustainable, and comes with full carbon offsetting because as many as 10 trees are planted for every one sold. How’s that for living the green life?

WoodenWidget is a France-based company started in 2006 by a boat builder. The idea behind it is first to sell stuff (duh) and, secondly, to get people into woodworking. People are no longer making things, and “we think that’s a real shame,” reads the introduction on the company’s page. To change that, they’re offering a series of products that you can build on your own; they’re selling plans, with detailed instructions, photos, and varied resources and suggestions for materials and where to source them.

The company makes anything from caravans to wooden bikes, dinghies, and the aforementioned Foldavan. Since October is Iconic Vehicles Month on autoevolution, and we’re looking at vehicles that live up to the name, as well as modern takes on them, Foldavan fits the bill, especially since it’s often included on unofficial lists of the world’s most creative and strange recreational vehicles.

The Foldavan is a bike trailer that expands laterally when at camp. Built on a wooden base with carbon fiber tubes and reinforced PVC cloth, it weighs just 30 kg (66 pounds) and has a payload of 75 kg (165 pounds) on the road and as much as 200 kg (441 pounds) when at camp. This means that you will be able to easily carry inside it the extra materials (crossbeams for the extension, mattress, and pillows) and even something on the side, like a foldable dinghy or whatever gear you need for your trip.

Designed for use on the last stretch of the journey, on that part where you can’t travel by car, the Foldavan has three operation modes: stow (for storage on the roof of your car during transport or at home during the off-season), travel and camp. In camp mode, it is 100-120 cm (39.3-47.2 inches) wide and offers 100 cm (39.3 inches) of headroom, so it’s big enough to sleep two adults after a very simple 5-minute setup. It’s not glamping or even halfway close, but it beats pitching a tent and sleeping on rough terrain, and you get protection from elements thanks to the waterproof roof. The tow arm and two kickstands at the rear offer stability when at camp.

WoodenWidget says the trailer has a low center of gravity, so it won’t topple over in high winds, as you’re rolling down the open road. In case winds pick up, you can always open up the sides so that air passes through the entire thing and there’s minimal resistance. The company plants five trees in Malawi for every set of plans sold – ten if you buy a dinghy from them with the Foldavan.

And this brings us to the very important question of who can build this thing and how. As per the company, a Foldavan takes an average of 50 hours to put together, and anyone can do it even without prior experience. However, some basic woodworking knowledge and a decent set of tools are necessary, along with the plans, which sell for €40 (approximately $46at the current exchange rate).

An estimate for the final price is not included, as it depends on the materials you choose to use and how you wish to personalize your build. The company urges you to source them locally or use whatever you already have lying around: the whole idea of the project is to get you into woodwork and, later on, on the road with your bike, with minimal impact on the environment not to encourage further waste. 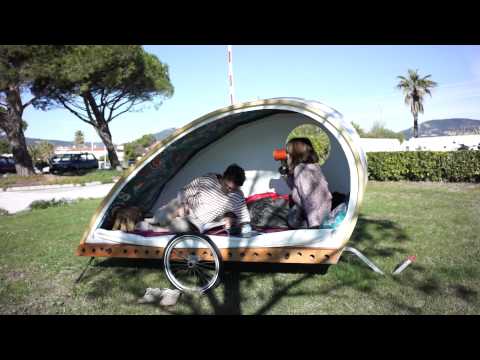 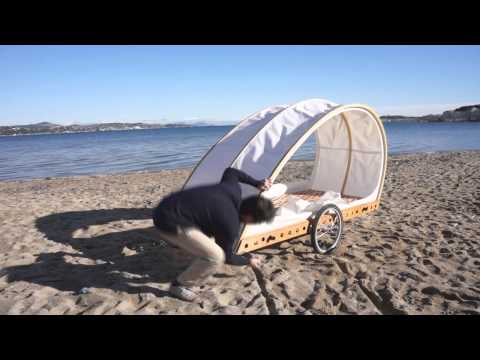 Dornier Do X: The Largest, Most Luxurious Way to Fly 100 Years Ago