1 Watch a BMW X5 With Serious Rear Damage Get Repaired

Mechanic Hammers and Welds Audi RS7 Wreck Back into Shape

There's another RS7 wreck famously repaired as part of a YouTube series, but the damage on that one looked a lot less severe. As usual, "Russian" mechanic Arthur got a shockingly bad car, probably bought at a salvage auction.
6 photos

At first glance, the damage doesn't look too bad. The front end frame, which is often very tricky to fix, looks okay. But this is not the kind of Audi that will just buff out.

The repairs start with the RS7 being completely stripped. That includes the luxury leather interior, all the glass, several body panels, and even the engine. With those out of the way, we can see just how bad the damage is.

Even though those elements will be replaced, Arthur beings by pulling out the damaged areas around the two pillars and rocker panel. The RS7 gets chopped using an angle grinder and then peeled like a $100,000 onion. Big hammers and wood blocks are also involved, which makes the process look crude. But don't worry, the frame was laser-measured beforehand.

When donor parts are matched up to the body, we start to see some techniques Arthur hasn't used before in his other videos. For example, he uses rivets to hold some components in place while he welded them. Also, a bonding agent is used, and the exposed welds are covered in something to protect them from rust, even before they're painted.

Unfortunately, we're denied the pleasure of a fully restored RS7, as the respray isn't carried out here. Maybe the buyer ran out of money. Even though he didn't have to fix the hood or doors on this one, Arthur still spent 70 hours repairing the Audi. That's almost two weeks' worth of work, which makes you wonder how he manages to upload a new video every week. 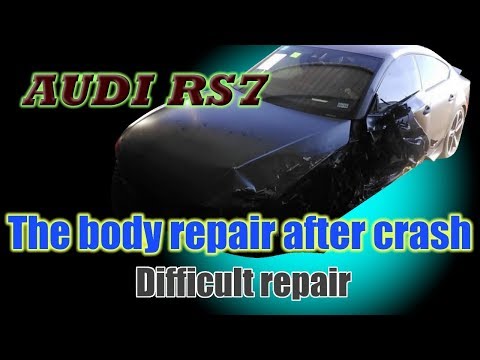