2 Yamaha Wants to Outsmart the Smart With the Motiv EV

This weekend, the creme de la creme of old-school speed junkies got together at the 73rd Goodwood Members Meeting event held in the usual location we’ve all grown to love. That’s where we got to see a rather impressive line-up of original McLaren F1 cars including some Longtails.
1 photo
Today everyone’s excited about the McLaren 675LT model that is basically the current incarnation of the original but let’s not forget about the car that took the world by storm with its specs back in the 1990s.

The Longtail models were actually modified GT versions that had a couple of changes up their sleeve. Apart from the elongated body that helped with downforce, they were also sporting a new sequential gearbox that was faster and lighter than its predecessor.

Only ten of these F1 GTRs were ever built and judging by the line-up at Goodwood we’d guess that all of them (at least those that are still running and intact) were present.

One particularly caught our eye. That’s because a funny scene unfolded with it as a protagonist. While on the way to the event, the driver of this beautiful road-legal McLaren stopped at a pub in Chertsey (according to the video description).

While he was using the facilities, an old lady tries to get in her Ford Fiesta and is scared not once but twice by the sound of that brilliant 6-liter V12 made by BMW. Poor granny. Either way, I’d be willing to get scared by that jewel of an engine any day of the week to be honest.

Legend has it that when creating the car, Gordon Murray wanted a Honda engine but being refused by the Japanese engineers, he moved to BMW’s Motorsport division that had plenty of Formula 1 experience at the time. The brilliant Paul Rosche joined in and came up with a 6-liter (6,046 cc) V12 that made 627 HP, weighing just 266 kg (586 lbs) and was naturally aspirated, of course.

In fact, the engine came out more powerful than Murray wanted, his project being done around an output of 550 HP with a weight of the engine that wasn’t supposed to go over 250 kg (551 lbs). BMW offered 72 more HP but also an added weight of 16 kg (35 lbs). That’s a good tradeoff if you ask me... 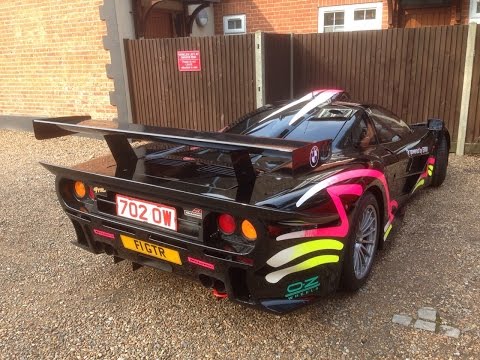