There are plenty of other supercar makers on the planet, like poor old Ferrari, for example. But for whatever reason, McLaren has been scoring point after point in this game. You could say that the 600LT is its heat check, made to see if it's still on fire like it was when the 720S came out.
3 photos

The 600LT is the culmination of the Sports Series that also includes things like the 540C and 570GT. Our point is that with some many good versions of the chassis, they didn't need to push things to extremes. But they did, and the Long Tail came out.

It's only natural to wonder how the best of the best from this class compares to the McLaren from the class above. It's like checking if the Cayman GT4 really can be a 911 replacement. Of course, we're not going to bother with things like refinement, since this is all about the straight-line speed and performance of two V8-powered supercars.

Perhaps tired of playing with American cars, the guys at Hennessey Performance decided to do a drag race between the 600LT and a 720S. Of course, having a drag strip in their backyard helps in situations like this.

Of course, we know the 720S will win. It's the supercar killer, and as its name suggests, it packs about 120 horsepower more from a slightly larger engine. But we wanted to see if its little brother can keep up, and it can... initially.

Both cars get a good launch, but when the power kicks in for the 720S, it starts to pull away. Its performance is even more convincing in the rolling race.

On paper, the 600LT isn't radically different from the 570S on which it's based, and those 30 extra horses probably wouldn't have counted for much anyway. But if you look more closely, the LT is a much more desirable car than its little sister, thanks to a revised body kit and special F1-style exhaust. It's also lighter by about 200 lbs, but the extra downforce it generates may have hurt its chances here. 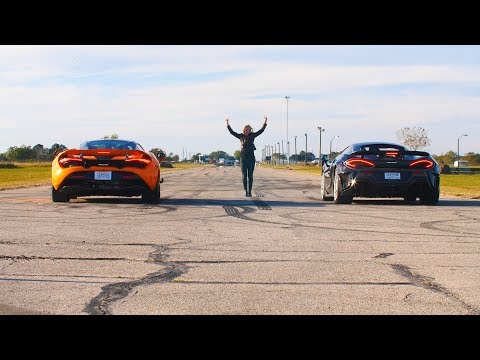