5 835-HP Rivian R1T Drag Races Ram TRX, the Tides Have Turned
Up Next

Home > News > U-turn
Dragos Chitulescu
Supercars racing other supercars, well, that's never going to get old. But, except for a small number of cities around the globe, chances are that you'll rarely see one driving down the street. Seeing two or more such vehicles at the same time is an even less frequent occurrence. So, of course, we won't miss the opportunity of seeing if one of the most modern McLarens can hold a candle to one of the most technologically advanced Ferraris.
9 photos

Now, you might think that pitching a Ferrari 812 Superfast against a McLaren 600LT is a bit unfair, given the difference in horsepower levels. But you should always remember that there's more to a car than that. In today's Italy versus the United Kingdom battle, the weight of these two machines might just play a decisive role in establishing the outcome. So before moving on with the quarter-mile (402 meters) action, let's have a look at the specs of both cars. The limited-edition 812 Superfast is powered by a 6.5-liter, naturally-aspirated V12 that puts out 789 horsepower and 530 lb-ft (718 Nm) of torque.

But the 812 Superfast is quite heavy, as it weighs in at around 3,968 lbs (1,800 kg)! That's not quite the figure you'd expect from an Italian supercar. But that's what you get when you add all the modern amenities to what is essentially a road-legal race car. Looking at the 2,989 lbs (1,356 kg) McLaren, its 3.8-liter twin-turbo V8 unit is rated for 592 horsepower and 457 lb-ft (620 Nm) of torque. So in terms of horsepower to weight ratio, these two cars are not that far apart, but the McLaren does have a minor advantage.

As you'd expect from a CarWow test, the McLaren and the Ferrari will be going through three different challenges: an all-out quarter-mile drag race, a roll race, and last but not least, an evaluation of their stopping power. For the first run of the day, the two contenders seem to be quite evenly matched, and we get to see a photo finish! The Ferrari reveals the reason for having "Superfast" in its name on the second run, as it gets an excellent start and finishes the same way. Finally, the third run is the decisive one, and the 600LT gets the win, which isn't necessarily proof that it's the faster car here.

The 600LT crossed the finish line in 10.7 seconds, while the 812 Superfast required an additional 0.4 seconds. The human factor is not to be taken lightly, and chances are that if this test would be repeated with 10 other drivers, the results would vary time and time again. Moving on to the roll race, it will be interesting to see if the McLaren will score another victory due to being lighter or if the Ferrari will turn the tables using pure grunt. For the first run, both cars will be using their least sporty settings and will be engaging in a wide-open-throttle battle as soon as they hit 50 mph (80 kph).

If you were expecting to see the McLaren 600LT in the lead for this one, you'd be disappointed. The 812 Superfast is in front for both the half-mile and 1-mile marker, with an exit speed of just under 200 mph (321 kph). For the next run, both cars will be engaging their fastest settings, but once again, the result is the same. As they are tied for points, the braking test will be the one to settle the score. Usually, you'd expect the lighter car to win this one, but the brakes on the 812 Superfast are on a different level, it seems, and fans of the Italian manufacturer will be happy to see the conclusion. 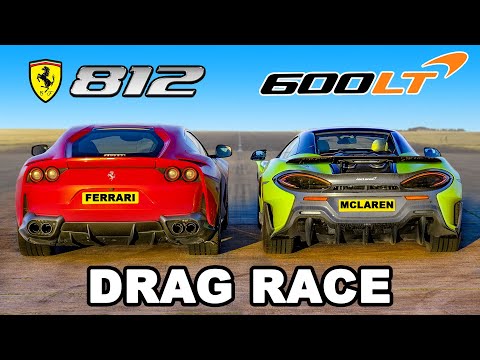