2 Lamborghini Burns to Ashes on the Sea to Sky Highway

McLaren 12C vs. Skater Video Was as Fake as Half of Youtube

Mihnea Radu
We really didn't expect mainstream television to unmask the McLaren 12C that was filmed having its windshield smashed by a skater. Yet an NBC 9 News reporter from Colorado just had an itch he needed to scratch.
1 photo
Frankly, we're not surprised it was fake. Most of the videos on Youtube are that way. But we'll get to that later.

For now, let's just focus on the facts. About a week ago, a video emerged where an orange McLaren 12C had its fair share of karma after running a stop sign. The amateur cameraman had his phone filming the wrong way and didn't capture the whole thing, but he did get a glimpse of the aftermath.

CCTV footage dug up by the reporter shows the skater being signaled when the 12C would arrive and not actually hitting the car with force. The folks who made the video weren't too careful to cover up their tracks because the Youtube channel is registered to a Paul Gonzo, the manager of an exotic car rental company who just happens to have an orange 12C.

The motivation? First and foremost, it had to be making an interesting video. They couldn't have known that it would become viral and reach over 9 million views in such a short time. According to the latest CPM rates for June 2016, they could have made between $7,500 and $10,000.

We should have known it was fake from the fact that the guy filming never reacted to anything. If you see somebody hitting something, wouldn't you point your phone at that? Honestly, though, most of your favorite interviews, reaction videos, and pranks on Youtube are fake.

Why risk nothing interesting happening on the day you rent a Lamborghini when all you need is to ask your girlfriends to play along and pretend to be gold diggers?

Editor's note: Speaking of karma, this fake video has resulted in a company downgrade on Yelp. That's the power of the internet, folks! 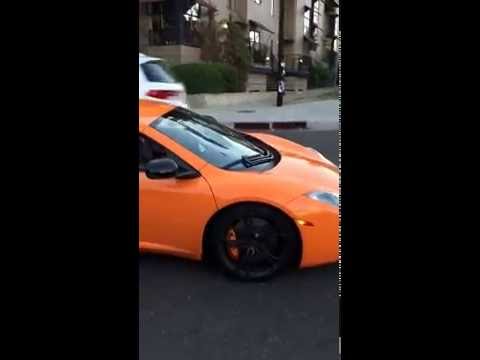