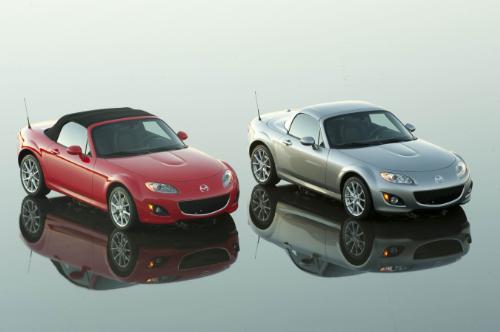 The Mazda MX-5 Miata made its global debut at the 1989 Chicago Auto Show and has since received several facelifts, as well as many limited and special edition versions. Now, the iconic two-seat roadster has just reached a new milestone of 900,000 units produced. Nearly 45 percent of those were sold in the United States since the car launched in 1989.

The 900,000th unit is a soft-top, six-speed manual-equipped Copper Red MX-5, and destined for Germany.

"Since Mazda launched the original MX-5, it has undergone two complete product redesigns and a series of upgrades," said Nobuhiro Yamamoto, MC program manager, MX-5. "Its enduring success is due to the strong support it enjoys from fans around the world, and I will strive to keep the MX-5's spirit alive while evolving it into a car that will be loved by even more people."

The first-generation MX-5 Miata (1990-1997 model years) was equipped with a 1.6-liter, inline four-cylinder engine that produced 116 horsepower and 100 lb-ft (135 Nm) of torque. A removable hardtop was optional and initial color choices were red, white and blue. The starting price back then was of $14,000.