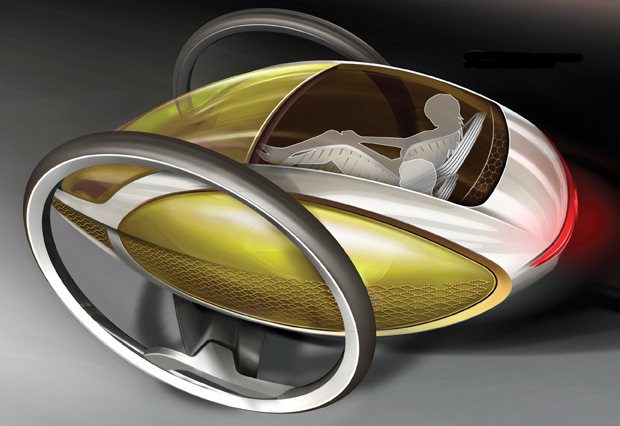 Somewhat unnoticed by the automotive world, the 2010 LA Auto Show Design Contest came and went this month, leaving stuff behind, as it does for several years now. It left behind bits and pieces of a possible automotive future, with more than a handful of remarkable models having been drawn up for the competition by carmakers and wannabe designers alike.

Among those models, the Mercedes-Benz Advanced Design Center in Japan snuck in the Maybach DRS Concept, an egg-like contraption for future urban motorists (for the record, we don't see this as a Maybach, but rather as a B-Klasse or smart). The DRS name stands for Den-Riki-Sha, or electric powered rickshaw, and that pretty much says all there is to say about it.

The DRS is powered by a self balancing electric drive unit, working as the onboard computer demands it to. Being a concept (read drawing), there's no telling how the performance figures for the model would look like, but its creators say that the range, whatever it may be, might be increased thanks to the.. pedals it comes equipped with.

As far as we know, the DRS is planned as a precursor of other similar weird concepts. Mercedes calls it its first Naturally Manufactured Vehicle (NMV). An acronym which pretty much translates “futuristic composition of ultra-light construction with a unique luxurious Exterior & Interior expression.”

“A radically new car culture will arise in the near future, which is aligned with modern architecture, infrastructure and nature,” Mercedes explained the reasons which led to the creation of the DRS.

“An astonishing variety of future automotive designs will grow, commensurate, with newly available energy sources, drive systems and alternative production methods. Light, transparent designs with sculptured elegance and an extensive range of comfort and safety options are finding their way into a new eco-conscious world.”