Maybach Destroyed by Kanye West and Jay-Z in Otis 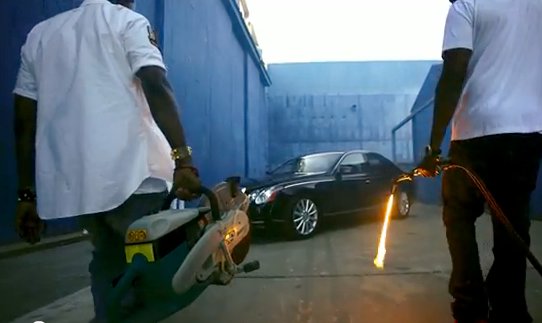 That’s the deal with hip-hop artists... They have the best-looking women, the best cars, the best cribs, the best parties (and after-parties, if you know what we mean). So when you have the means to afford all that, why not trash a luxury car from time time... just for fun... or to make a statement.

Jay-Z has so far treated us with plenty of luxurious four-wheeled appearance in his music videos so far. Take, for example, a Ferrari F430 and Pagani Zonda, a Jaguar XJ, and an Aston Martin Vanquish, as MotorAuthority resumes.

The car that Jay-Z puts on his every demand list whenever he has to perform somewhere has returned, this time occupying the hot spot in the rapper’s latest music video.

A feature with Kanye West, Otis, with the video directed by the famed Spike Jonez, is the first single from their 'Watch the Throne' album. The music video opens showing only Kanye & Jay's weapons of destruction, and of course their future victim: the Maybach luxury sedan.

You only get to blink once and the remastered car appears in the form of a hot rod/road racer pimped ride, with the doors, hood and grill repositioned where the trunk used to be and a fire-breathing tailpipe.

Oh, and by the way, it looks like the Maybach will be donated to the relief efforts in the East Africa drought.

So if you afford to do it, why not? We can’t blame them. Can you? We’re gonna rap our way out of this and let you ‘enjoy’ the video: