Mihnea Radu
Worthersee is always Mecca for Volkswagen fans, but we got to see a lot more love for Audi and especially BMW this year. Vossen Wheels was there, obviously, and they took detailed photos of all the cars that had been fitted with their wheels.
62 photos

We certainly feel that they didn't pay enough attention to the lowered Tiguan and Golf R Variant, especially as it's the brand new version of the latter. They also have matching wraps in blue and teal, but there are other things worth checking out.

The Worthersee has always been a testing ground for new wheels, and 2017 was no different. The American company came out with the Vossen Forged Modular Wheel Program. It's a multi-piece setup that seems to give a retro feel. But because the joining bolts can be hidden behind the flange, it's not as restrictive as you'd think.

In addition to the modular prototypes that were on display, a few new forged monoblocks were out too, such as the all-new LC2 Series, as seen on a wildly-liveried Passat Variant. It was also a member of the "How Deep?" family, sporting a bright livery, as well as some Lamborghini brake calipers to show off the wheels.

I don't think the people with older car got ignored either, as the E91 BMW 3 Series Touring made a great showing. And while we're on the subject of wagons, we have to mention the green Audi RS6, which we've seen before.

"It’s amazing how much anticipation there is leading up to our annual Wörthersee trip, but then it’s over in a flash and before anyone realizes it months have passed. Add that to the pace of the Vossen Forged factory and the new projects that are constantly popping up and it’s a wonder that anything gets done around here! But this Wörthersee was different—it was as if there were more pieces involved," says Sam Dobbins, the photographer and eternal VW fan who works for Vossen. 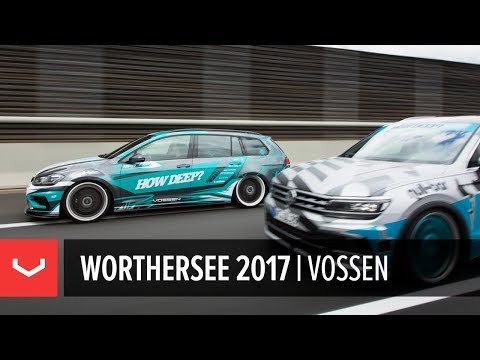