5 Model X Vs. Land Cruiser Tug-of-War: Time to See What Legends Are Made of
Up Next

Home > News > U-turn
Vlad Mitrache
Might we say that tug-of-war is to off-road vehicles what a quarter-mile drag race is for performance vehicles: the easiest way to have some fun and find out which one is better under a more or less relevant metric?
9 photos

To be fair, at least two of the vehicles entered in this five-way competition would have done a decent job in a drag race as well. The RAM 1500 TRX, with its 6.2-liter supercharged Hellcat V8 developing 702 horsepower, definitely has the grunt to move the truck's 6,300-ish pounds (2,860 kg) with determination whenever it's asked to. However, power doesn't play that big of a role in this type of competition, so don't put all your chips on the TRX just yet.

The other truck that doesn't normally shy away from going quickly is the Ford F-150 Raptor. The twin-turbo V6 engine puts out 450 hp, but even though that's seriously less than its V8-powered rival from RAM, the Blue-Oval truck has another thing up its sleeve this time: factory-spec 37-inch tires that look almost comically big in those wheel arches.

All these numbers make a challenge out of matching these five vehicles up, but the guys at TFLoffroad probably did the best possible job. On one side of the table, they pitted the two Japanese trucks against each other with the winner facing the Bronco. Over on the other side, there will be only one match, but it's probably the main event anyway as it'll see the Raptor and TRX pulling for a place in the final.

The battle of the two Ts (Tundra vs Titan) goes very much according to the physics rules we all abide by as the heavier and more powerful Nissan wins. The same goes for the TRX and Raptor, though the win there is adjudicated by much finer margins.

When the Bronco goes against the Titan, we can see the difference between a truck built for off-road and one built primarily for work that also happens to have some off-roading abilities. The Ford SUV compensates for its lower output and weight with the massively superior tires and mechanics to pull the Nissan truck with relative ease.

So, after defeating the F-150 Raptor, the RAM TRX will face another Ford in the final. Surely, one that has smaller tires, less power, and weighs less than the pickup truck the RAM defeated in the first round isn't going to pose much trouble, right? Well, you better see for yourself. 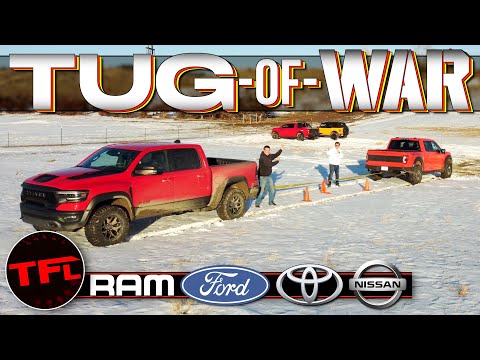