2 Optical Camera Gets Tossed Into the Air at Over 1,000 MPH, Here’s What It Sees

4 SpinLaunch Is a Big Slingshot Shooting Stuff Into Space, an Idea So Simple It’s Genius

It was back in February of this year when an up-and-coming company called SpinLaunch caught our attention and prompted us to look more intently into the product they offer: a massive slingshot that can accelerate stuff so hard it could easily reach orbit.
20 photos

Since that time, SpinLaunch has progressed greatly. Back in April, the company conducted its eight test flight, sticking a video camera inside the slingshot, accelerating it to over 1,000 mph (1,600 kph), and launching it into the air.

Test number ten happened last week, but was just now made public by SpinLaunch. This time, it didn’t include just a camera, but actual payloads, as both the company and its potential clients (in this case NASA, Airbus, Cornell University, and Outpost) wanted to see if stuff could survive the harsh acceleration conditions.

What are those, you ask? Well, consider the fact SpinLaunch is actually an accelerator comprising a vacuum chamber, a carbon fiber tether, and a launch vehicle. The vehicle is attached to the tether, which in turn is tied to two electric motors, which in turn spin the entire contraption inside the vacuum chamber at speeds that can reach up to 5,000 mph (over 8,000 kph). That’s six and a half times the speed of sound, in case you need a reference point.

Last week’s test managed to demonstrate “standard satellite components are inherently compatible with the company’s launch environment,” the company says, with all the undisclosed cargo sent up tested at high-g loads, launched, and recovered successfully.

It’s unclear whether more tests will follow this year, but the company is likely to accelerate the fine-tuning of the system, as it plans to have it operational in late 2024. 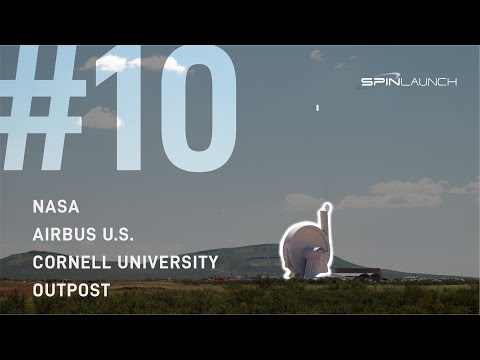