5 Millionaire Parting With His Massive Luxury Yacht, an Awe-Inspiring Modern Classic Racer
Up Next

Massive Mitsubishi Carrier to Be Fitted With a Revolutionary Sailing System

Home > News > Float and Dive
Otilia Drăgan
Traditional shipping and advanced technologies are the perfect match when it comes to modern sailing systems harnessing wind power. Several of these top-level solutions are promising to help decarbonize the maritime industry, but WindWings claims to be the most efficient one out of all.
6 photos

Retrofitting old fleets with zero-emission systems is one of the many paths that can lead to cleaner transportation, and this solution is being implemented for a variety of vehicles, from cargo aircraft to locomotives and vessels.

This is what’s coming up for Pyxis Ocean, a five-year-old massive bulk carrier with an 80,962 deadweight tonnage. But it won’t be fitted with fuel cells or batteries. Instead, a pair of sails will help reduce its fuel consumption. It should be a significant reduction of up to 30% for the full-scale deployment, which is estimated to be higher than that of all other wind propulsion solutions on the market.

The sails are called WindWings and were designed by the naval architects at BAR Tech, a company derived from former British America’s Cup Team. Pyxis Ocean is a Mitsubishi Corporation vessel that will become the first one to be equipped with the WinsWings. Yara Marine will be in charge of the retrofit, in collaboration with Cargill.

This modern sailing system is completely automated, with wings that can be launched or folded away with just the touch of a button. This also means that there’s no need for an additional crew. Its greatest advantage is the significant reduction in fuel consumption and CO2 emissions without affecting speed. Plus, it’s versatile enough to be installed on ships of various sizes, both new and old.

“Reductions in fuel consumption via the exploitation of wind energy as a free fuel generates the two-fold benefits of lower fuel costs and lower emissions,” said John Cooper, CEO of BAR Tech.

Proudly sporting its new WindWings, Mitsubishi’s Pyxis Ocean will be entering service at the beginning of next year. 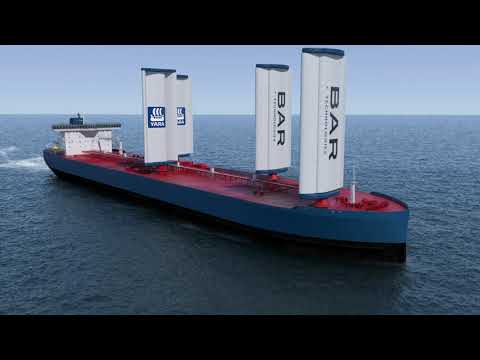