1 Conviair YB60: Colossal, Jet Powered, and Slain By the Stratofortress

5 185-Foot Wings Take B-52H Stratofortress to the Sky, Will Do So Until Bomber Turns 100
Car video reviews:
Up Next

Massive B-52 Stratofortress Bombers Struggle with High Winds, Seem to Drop Out of the Sky

2022 kicked off with a bang in Europe, with massive military buildups in the East, and a storm of epic proportions ravaging the West – and so, the month of love is now one of man-made threats and natural devastation for most Europeans.
11 photos

Across the Western part of the continent, but more specifically over in the UK, storm Eunice put on quite the show last week, and it continues this week as well. A show that was broadcast across the world by cameras and news bulletins.

During Eunice, particular emphasis was placed by some daredevils (and the public) on aircraft coming in to land. A particular live stream from the Heathrow Airport in London, showing countless airplanes and their pilots struggling against the wind as they came in to land, got a certain streamer called Big Jet TV over 7 million views on Youtube since February 18.

But civilian aircraft were not alone in the sky during Eunice. Given the events in Eastern Europe, military traffic peaked, and that placed impressive pieces of hardware in harm’s way as well. Like the two B-52 Stratofortresses you can see in the video attached below.

The clip, published on Friday by a channel called Military Aircraft Videos, shows the massive American bombers allegedly returning from a training mission over in Sweden and having to land at the RAF Fairford base in the UK, in high wind conditions.

Although the overall feeling we get is that the military pilots had it way easier than their civilian counterparts over at Heathrow, especially when it comes to the actual landing, there are a few instances, on approach, when the two airplanes seem to be on the verge of dropping out of the sky.

They both manage to land safely, as you can see in the video attached below. 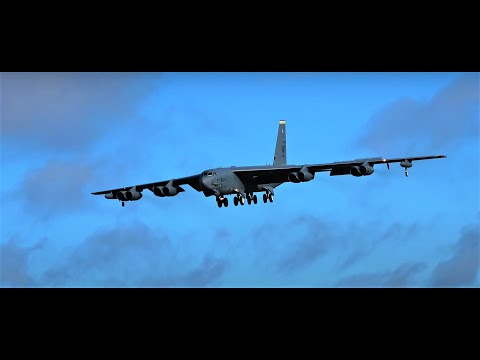