1 1969 Pontiac GTO Barn Find Is as Original as It Gets, Needs Just a Little TLC

4 Huge Barn Houses 25 Unrestored Classics, They Can Be Yours for Only $80K

Massive 174-Car Barn Find Valued at $1.4 Million, Is About to Hit eBay

Barn finds, the unicorns of the automotive industry: they’re rare, they’re hypnotizing, and they can tell incredible stories. This London barn find has all these magical ingredients – as well as the estimated price tag of $1.4 million.
19 photos

Make that £1 million, since we’re talking about a UK-based collection. Its existence was made public last week by YouTuber TheTFJJ, who described it as the most incredible thing he’d seen, if only by scale. Situated in a massive warehouse in Tottenham, North London, it comprised over 170 vehicles of various makes and in various states of neglect.

That number has been narrowed down to 174, with London Barn Finds handling all inquiries and progress on finding all these items new homes. More details about the barn find have also come to light, with the most interesting being that it belongs to a passionate collector and that it’s a two-decade “labor of love.”

That’s what Freddie Fison calls it in a new interview with Ruptly. Fison is representing the anonymous collector in exchanges with the media. He says that the collection came about organically and that the owner never intended to hoard all these (former) beauties into storage, to be covered in dust, grime, and bird droppings. He drove all of them there for safekeeping, and each purchase was one made of love. The reason for selling it is that the council is claiming back the warehouse.

There’s a lot of emphasis on how the collection is a labor of love, most likely out of fear that it would be otherwise described as a junkyard of sorts. How else could you explain someone putting such a random mix of vehicles under the same roof and then not looking in on them ever again? Say what you will, but what stands out most about the collection is not the amount of dust it has gathered but the sheer neglect. Some items are nearly falling apart, and you can tell no kind of love went into keeping them in one piece.

Speaking of items, they will be listed separately on eBay in the following days. London Barn Finds says on social media that some have sold during the public viewing that took place last week, and everything else left will be sold online, to give everyone a fair chance at ownership. The most expensive car is a 1960 MG MGA valued at £25,000 ($35,000 at the current exchange rate), while the cheapest is a 2000 Citroen Berlingo, valued at £100 ($139).

Reports in the British media note that paperwork is lacking on some vehicles, and many have not been taxed in decades. The auction house is currently sifting through 15 boxes of documentation provided by the owner. On the bright side, that same owner insists all vehicles start and run. 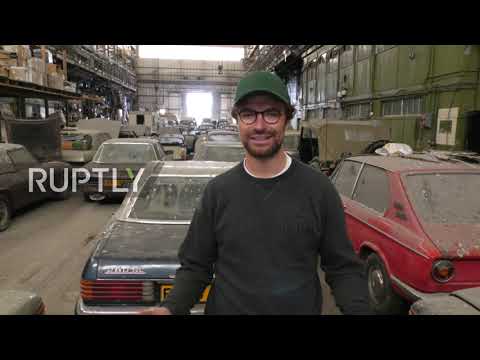