1 Driver of $315,000 Ferrari F8 Tributo Finds Out You Can’t Drive Without Insurance

3 Park Your Car’s Shadow in the Disabled Spot and You Get a Fine, Ford Driver Claims

Maserati Levante Drives Down Historic Steps in Rome for a Selfie, Driver Is Arrested

When in Rome… be mindful of the historical places you visit. This also includes not driving down the iconic Spanish Steps outside the Trinità dei Monti church in Rome, which is exactly what one fully-grown 37-year-old man did. For a selfie.
6 photos

In the early hours of Wednesday last week, a Maserati Levante drove into the pedestrian zone outside the Trinità dei Monti church in Rome, and then down the stairs that connect it to the Piazza di Spagna below. Also known as the Trinità dei Monti steps or the Spanish Steps (built in 1725), this staircase is a historical monument protected by law, and one of the most popular tourist attractions in the whole Italy.

One tourist decided to visit it by car.

It’s the stupidest stunt you could imagine, and the fact that he did it for a selfie adds another layer of ridiculous to it. Polizia Roma Capitale posted CCTV footage of the stunt on social media, along with the announcement that the culprit had been caught. The video is also available at the bottom of the page and, as you can see at the 0.32-second mark, it does look as if the man is snapping a photo of himself in front of the Maserati, which stalled after the first flight. In this day and age, would this have happened if he didn’t have the selfie to prove it?

According to SkyNews, the driver was apprehended at the airport, as he was trying to return the rental Maserati. So yes, it wasn’t even his car.

Police worked with the rental company after reading the plates on the surveillance video and arrested him on the spot. He’s been charged with “aggravated damage to cultural and monumental assets” and is facing at least a massive fine – one person who carved his initials in the Colosseum a few years ago, for instance, was fined €20,000, which is approximately $21,000 at the current exchange rate.

The same report notes that the SUV caused serious damage to the 16th and 29th steps on the right-hand staircase, with smaller chippings, scratching and abrasions noticeable on both ramps of the second level. Authorities say that the steps have been temporarily repaired, but further interventions are necessary. 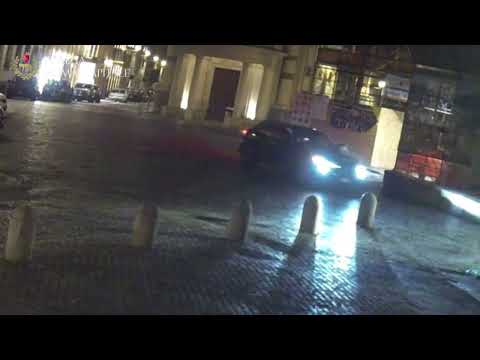