1 Michael out, Mikhail in

5 Ford Shuts Down Its Russian Factory
Up Next 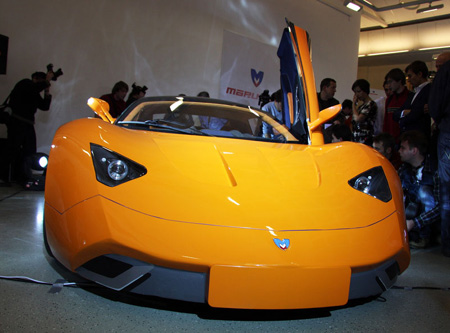 The Russians want in on the super car game and have created a car that could revolutionize it all. Italian design, posh color and sensual name, the Marussia has been unveiled to the public and is now awaiting comments both good and bad.

The Russian supercar seems to borrow looks from a Lamborghini, but doesn't seem to share the same power, as the Marussia houses a 240 horsepower powerplant. This is apparently Russia's response to the supercar market and an attempt to develop and use an electric engine, RussiaToday reported.

The creator of the Marussia project is the former FIA N-GT racing champion, popular Russian singer, TV-anchor and theatrical actor (this guy seems really busy) Nikolay Fomenko. While competing in the FIA Gran Turismo races he developed the idea of creating the Marussia sports car and with the help of his partner Efim Ostrovsky started the work on his beloved Marussia project.

The car's engine is rumored to come from Renault or Nissan and a big part of the car will not be built on Russian soil. The expensive part of the Marussia project will be tweaking the engine to produce the needed power, an action that might be rather difficult considering the lack of funds. But the car's producer thinks that the crisis will act in his favor, helping him to sell more Marussias than the more expensive brands.

“There can be no crisis in the real sector. We hope the ecological transition will come soon enough. If our innovative work goes as planned we will have electrical cars that can travel 400 kilometers without recharge by mid-2009,” said Fomenko.

The first model of the Marussia available to consumers will appear in Autumn 2009, while the sport version in the 2010 edition of FIA Gran Turismo season.