Have you noticed how all the best movie cars come from the era before product placement? And while the DeLorean goes hand-in-hand with Back to the Future, plenty of people are also crazy about Marty's Toyota SR5.
7 photos

These old Toyota trucks are famous for many things. First of all, their rugged reliability and simplicity made them popular with certain extremist groups. Also, the old Top Gear crew did all sorts of things to try (and fail) to kill one, including leaving it in the ocean and putting it on top of a building being demolished. Thus the notion that they're indestructible was perpetuated.

But pixel massager wb.artist20 says he was just as much a fan of the Toyota SR5 in Back to the Future as he was of the DeLorean. It was a really popular movie in that era, and when Marty said "check out that 4x4" many people instantly fell in love with the pickup.

DeLorean as a company isn't around anymore, but while Toyota's Tacoma is still going strong, the one from the movie isn't. After filming, the SR5 was given away and the new owner totaled it. But they did make a copy for the second and third chapters.

Several elements from the original were applied to a Tacoma to make this rendering happen. We've got the suspension lift, the large wheels with the polished lip, and a bunch of KC off-road accessory lights. In addition, the artist changed the front end to have retro-looking square headlights and put a modern spin on the SR5 Xtra Cab's funky-looking side windows. As for the DeLorean you see flying in the background, it's the concept created by Angel Guerra, which we also recommend checking out.

Speaking of recommendation, we found a video on the second movie truck, and it has an interesting story - stolen and used by a drug cartel in Mexico. Also, for the 2015 LA Auto Show, they made a 2016 Toyota Tacoma look like the one in the movie, something else you guys might want to check out. 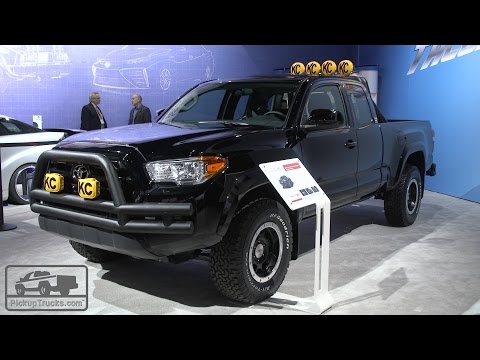