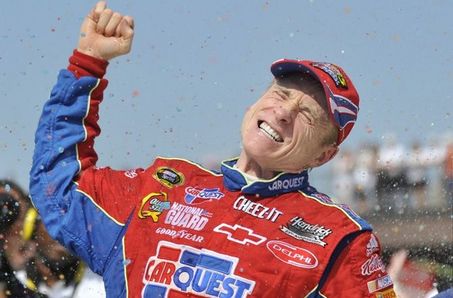 As wine gets better and better by the year, so does NASCAR veteran Mark Martin. The Hendrick Motorsports driver and championship leader won the first race of the Chase on Sunday, at the New Hampshire Motor Speedway, fending off Colombian driver Juan Montoya after the last restart of the day.

Although starting the race from outside the Top 10, Martin showed some impressive pace all day, as he used some good pit strategy to move up the pack by the mid-race. He eventually clinched the lead shortly before the last round of pit stops and started building an increasing lead ahead of the field.

However, as the old saying goes, when it seems too good to be true, it usually isn't. Although leading most of the second half of the race, Martin saw his potential win endangered by pole-sitter Juan Montoya. The Colombian made the most of the penultimate caution of the day and moved into 2nd place at the restart, challenging Martin for the win with 4 laps to go.

The veteran showed no mercy though, and managed to hold Montoya off after a couple of laps, therefore ensuring his first win of the Chase. The race eventually finished under caution, with A.J. Allmendinger spinning into the wall in the penultimate lap of the race.

Montoya was to lose his runner-up spot to Denny Hamlin, as he was unable to keep the pace after his battle with Martin. However, his podium finish at Loudon move him to 4th place overall, while Cup champion Jimmie Johnson had to settle for 4th place overall.

In the overall classification, Martin now leads from Johnson by 35 points, as the reigning Cup champion is tied by Denny Hamlin at 5195 each. Tony Stewart suffered from mechanical problems in the first part of the race and eventually had to settle for the 14 place, which dropped him to 6th place overall – 64 points down to Martin.