4 Mars 2020 Spacecraft Has All the Air Sucked from Around It, Survives

5 Your Name Can Land on Mars with the 2020 Rover
Car video reviews:
Up Next

The concept of heavier-than-air flight was proven more than a century ago on Earth. But despite decades of space exploration, no one has ever tried flying such a machine in another planet’s atmosphere.
1 photo
That will change in 2021 when humanity’s next Mars mission will land on the Red Planet a machine that is not meant to stay on the ground: the Mars Helicopter.

The vehicle is perhaps the black sheep of the Mars 2020 mission, as it carries no scientific instruments whatsoever. Its sole purpose is to take its insect-like body up from the soil and into the atmosphere.

If it stays aloft, it will prove that things can fly even in an environment that has one percent the density of Earth’s atmosphere.

The Mars Helicopter kind of already proved that already during a January 2019 flight test in a simulated Martian environment. During the flight test the helicopter was airborne for one minute at an altitude of 2 inches (5 centimeters) and proved that it can fly in a Mars-like atmosphere.

The vehicle then passed all subsequent tests, regardless of their nature, NASA said in a statement on Friday (June 6).

"Nobody's built a Mars Helicopter before, so we are continuously entering new territory," said in a statement MiMi Aung, project manager for the Mars Helicopter.

"Our flight model - the actual vehicle that will travel to Mars - has recently passed several important tests."

The Helicopter weighs four pounds (1.8 kg) and has a fuselage about the size of a softball. It is equipped with twin, counter-rotating blades that will spin at 3,000 rpm. In all, 1,500 individual pieces of carbon fiber, flight-grade aluminum, silicon, copper, foil and foam make up the craft.

If successful, the helicopter flight in 2021 will give a new dimension to interplanetary exploration, as it will allow for aerial reconnaissance of alien worlds from altitudes much more revealing than the distant orbit. 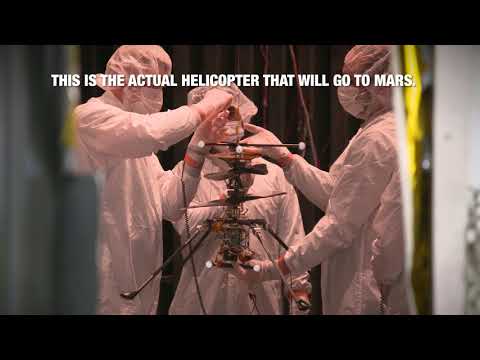