2 Yoshikawa to Replace Rossi in Yamaha Lineup
Up Next 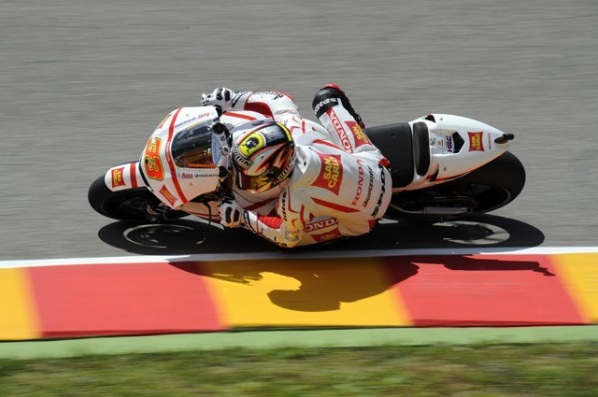 This weekend's Dutch Grand Prix at Assen has become forbidden territory for Honda Gresini's Marco Melandri, as the Italian rider suffered a dislocated left shoulder in a crash during the final practice session on Friday.

The Italian rider rode his Honda RC212V only 12 minutes into the FP2 of the Assen event, when he braked hard trying to approach Turn 7 and was thrown away from the bike, landing on his left shoulder. He was immediately assessed by the Clinica Mobile where he was X-rayed, after which he was taken to the nearest hospital.

Melandri was diagnosed with a posterior dislocation of the left shoulder and will certainly not take part in today's qualifying session. Consequently, he won't get to qualify for the grid of Saturday's Assen TT race, meaning his team will only field Marco Simoncelli for the Dutch GP. That will leave the MotoGP field with only 15 bikes for the weekend, the fewest in the history of the series.

Talking about the final practice session of this weekend's event, Yamaha's Jorge Lorenzo once again topped the field in the timing reports, scoring the best time of 1:34.769. Casey Stoner of Ducati Marlboro Team continued to stay on his tails but, as compared to the first practice session, the Australian rider finished the 90-minute action more than 3 tenths of a second behind.

Honda's Dani Pedrosa moved up to 3rd place as compared to his poor performance in FP1, clocking some 0.363 seconds behind Stoner. Tech 3 Yamaha's Ben Spies managed to score the 4th fastest time, emerging ahead of Ducati's Nicky Hayden (who experienced both engine problems and a minor fall 3 minutes to the end), LCR Honda's Randy de Puniet and Honda's Andrea Dovizioso.