1 Here’s Jay Leno, 71, Hanging Off the Nose of a Flying Plane Just Like Tom Cruise

2 The Amphicar 770, a Long-Lost Dream, Could Be the Perfect Vacation Vehicle

An unwritten rule says that, if you’re a tourist, you must do touristy things. If the time spent in a certain location is short (think a weekend getaway), then a tourist circuit is your best shot at experiencing the life in that place.

Marcel Is a Cute, Duck-Shaped Tour Bus That Also Floats, Packed With Tourists

August is Travel Month here on autoevolution, and as the world is opening up again, tourism is picking up. It’s been a rough couple of years for everyone, given the international health crisis, but we’re getting some reprieve as travel restrictions ease. So we’re dedicating this month to ideas that could potentially make your summer vacation just perfect.

Europe, the Old Continent, has always been a hotspot for tourists, even for those in the United States. Old buildings, old history, exquisite cuisine, and gorgeous sights are just some of the things that draw millions to visit Europe each year. Many of them end up in Paris, the capital of France and, as per that unwritten rule, most end up taking one of those tourist floats on the Seine.

As of last month, the fleet of floats includes a new vessel, though it looks nothing like a boat. It is France’s first amphibious tour bus, a duck-shaped and rather cute thing called Marcel, developed and put together by a French startup named Les Canards de Paris, or the Ducks of Paris. It’s a fitting name, albeit not a very surprising association: ducks can float on water and they can waddle on land, as well.

So does Marcel. Marcel is a 35-seat bus that promises the most unique tourist experience in Paris, which can be thus viewed from both land and water. “Experienced” might be a bit of an overstatement, since the trip only lasts one hour and 45 minutes, but as tourist circuits go in the city, it’s a decent one. Of these 106 minutes, only 20 are spent sailing on the Seine.

Amphibious vehicles have been around, in some form or another, for decades for civilian use – and longer than that for the military. For a while there, they seemed to hold the promise of the “perfect” family slash recreational vehicle, for their ability to travel on solid ground and water, but various efforts in this sense would later prove the fallacy of that assumption. Amphibious vehicles fail precisely because of this dual set of skills, since they’re not particularly good at either driving or sailing.

That said, for tourists, they’re great, mostly because they don’t have to excel in terms of speed, economy, or ease of use in either capacity. And because this dual ability allows them to bypass heavy traffic. Marcel is a hybrid tour bus that took seven full years to bring to fruition. Philippe Mallet, one of the founders of Les Canards de Paris, tells News in 24 that building Marcel was almost as challenging as getting it road-legal. This being France’s first amphibious tour bus, there was “no special regulation” regarding a vehicle of this type.

Marcel is registered both as a bus and as a boat, like is the case with amphibious vehicles still used today. However, because Marcel is a fleet vehicle, the driver has an extra layer of certification, Mallet says: he is a bus driver and a captain, so he’s had at least five separate trainings, including one in first-aid.

Marcel was almost entirely built in France, the startup is proud to announce, through a partnership with local authorities and several local partners. The engine and the chassis are sourced from Calvados and the Lyonds suburbs, but the electric motor and the hull were imported. Les Canards de Paris doesn’t offer specifics on the build, such as the type of engine used or the motor, but it does say it’s currently working on a fully-electric version. Whatever mileage is put on the ICE engine on land is being carbon-offset. This is a tourist ride with minimal impact on the environment, and in the context of tourists being advised to pick more eco-friendly means of exploring an environment, it should weigh heavily in the balance.

Presented as “no ordinary sightseeing tour,” the Marcel tour offers a good look at some of the most famous Parisian landmarks (but still includes “a few surprises”): the Eiffel Tower, the Invalides, The Alexander III bridge, The Little Palace and the Great Palace, Champs-Elysées, the Arc of Triumph and Trocadero. On the Seine, tourists are offered a taste of “la Seine Musicale,” the Saint-Cloud gardens, and the skyline of La Defense district. Guides are fluent in French and English, and will engage with the guests throughout the tour.

So, if you’re in Paris this summer and want to do the touristy thing but with a twist, Marcel is here to serve. Prices are €35 for adults and €20 for kids, or roughly $41 and $23 at the current exchange rate. 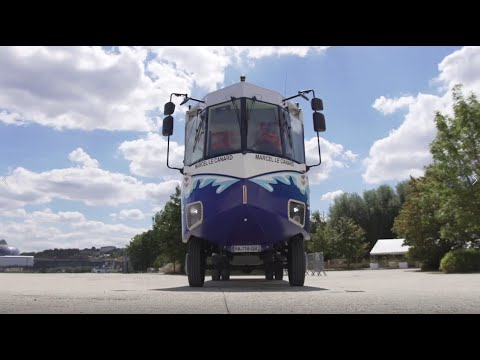