Home > News > Classics
Cristian Agatie
Juan Manuel Fangio is still regarded as the best F1 driver of all time, especially considering he won titles while racing for four different brands: Alfa Romeo, Ferrari, Mercedes-Benz, and Maserati. In retirement, Fangio built a museum documenting his career and one of the most beautiful pieces from the Mercedes-Benz floor was a 300 SL Roadster he received as a farewell gift. Now, it can be yours.
24 photos

The 1958 Mercedes-Benz 300 SL Roadster is the gift Daimler Benz AG prepared for Manuel Fangio when he announced his retirement in 1958. The roadster was painted Metallic Light Blue over Crème in a similar motif to the Argentinian national flag. The 300 SL still has the patina from El Maestro intact and unchanged. This means the gear selector, steering wheel, and seats have not been replaced, and the leather-trimmed underside of the dashboard still reveals wear from Fangio’s knees as he shifted gears.

Make no mistake, this is a single-owner 300 SL Roadster, with all the originals in place. It comes with a matching-numbers body, chassis, differential, engine, gearbox, hardtop, and hood frame. Fangio had the car as his regular daily driver throughout his retirement. It has 72,951 km (45,329 miles) on the odometer, most of them covered by Fangio himself during his tours throughout Europe and Argentina.

Owning a piece of history is something many collectors are after, and not many accomplish. This 1958 Mercedes-Benz 300 SL Roadster is an incredibly rare collectible in itself. Having been owned and driven by the great F1 champion Manuel Fangio is just the cherry on the icing and we expect to add a lot of value to an already exclusive offering.

We will not get to know the selling price of the car unless the new owner will chose to disclose it himself, which is highly unlikely. That’s because RM Sotheby’s is selling it through a special sealed bid event and everything about the sale would be kept under wraps. We can only imagine the new owner will pay an eight-figure amount of money, considering how precious the 300 SL Roadster is and how other cars in Fangio’s collection have faired at auctions over time. 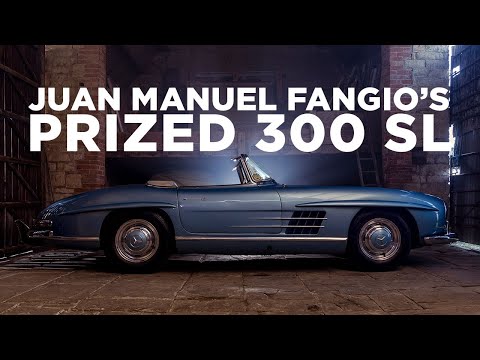