Mihnea Radu
Rockets, grappling hooks, drones and the odd sidekick - Batman has a lot of stuff he needs to bring into battle. And when the Batmobile wasn't cutting it, the caped fighter decided to buy an Audi RS Q8. It's fully customized, of course, with black paint and a bat-themed body kit that brings both terror and envy to the hearts of low-level thugs.
12 photos

It's a crazy idea, we know. There's still a lot of people who hate SUVs, but it's 2020, and dads want 600 horsepower 4x4s, not sedans or wagons. Comic book heroes need to get with the program and Batman has always liked being two steps ahead of everybody else.

A normal RS Q8 can cost a small fortune with options, but this model is anything but normal. It's the one Mansory just unveiled this week, and while we have shown you the SUV before, this video by RoCars provided another look and an opportunity for nerdy jokes.

The superhero connection came to us while looking at the back of this custom SUV. It has diamond-shaped exhaust tips and a diffuser that resembles the Lamborghini Centenario, two features that look completely different from the stock RS Q8 setup. Mansory also added a large carbon-fiber wing reminiscent of the Tumbler's hydraulically powered flaps. Finally, there's a strong connection between these red stripes and the oldest Batmobile of them all.

The front end is even crazier than the back. Unless we're mistaken, this is the first Audi SUV with a custom double-vented hood. The bumper is wider than stock and includes numerous distinctive carbon fiber elements plus an illuminated Mansory logo.

After looking at the interior, it's safe to say that this SUV won't age well. With a bunch of carbon trinkets scattered all over the place, this looks like a Golf GTI project rather than something that costs supercar money. But it's pretty safe to say that no RS Q8 stands out as much as this right now. 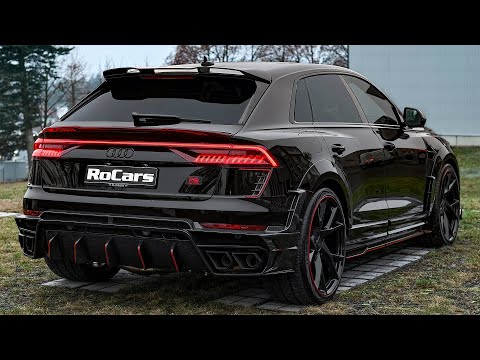