3 $2.6M Will Get You a Week of Bliss Onboard the Luxurious Ahpo, Here's What You'll Pay For

4 How Did Conor McGregor Celebrate Father's Day? On His Lambo Yacht, in Cannes

When the year begins, St Barts is where the most stylish superyachts owned by some of the world’s richest people make an appearance. Later in the summer, they kick of the vacation season on the famous French Riviera, one greater than the other. One of these beauties is Seasense.
14 photos

It’s that time of the year when the world’s most popular luxury vacation destinations are flooded by equally-luxurious toys belonging to millionaires and billionaires. One of the superyachts recently spotted by Superyacht Times is Seasense, which anchored off Antibes, on the French Riviera. The 219-foot (67 meters) custom Italian pleasure craft is a rare sight, since its owner doesn’t share it with anyone other than his family and close friends.

Five years ago, Manhattan-based Charles S. Cohen was still amazed by his brand-new luxury toy. A real estate developer and movie producer, Cohen has many other interests, which he would summarize as “a luxury collection of office buildings, apartment houses, showroom buildings, high-end cinema and film,” in an interview with Boat International.

He chose the acclaimed Italian ship builder Benetti because he also happens to be “a big Ferrari and Lamborghini fan.” Seasense boasts a striking military-inspired exterior. This was the result of a collaboration with Cor D. Rover Design, the Italian brand’s first project with the Dutch designer. It was also a first for the AREA Architecture Studio, which had never designed the interior of a superyacht before.

The real estate developer and his wife were also very involved in the entire process, and detail-oriented. But it was worth it, and the multiple awards the Seasense won at its debut confirmed it. It can sleep up to 12 guests in six cabins, and its raised pool is one of the most beautiful ones on a superyacht, resembling those of luxury resorts. 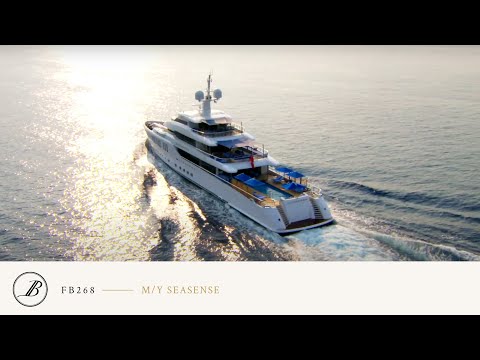