2 After Six Months in Space, Crew-3 Astronauts Are Finally Back Home

3 The ISS Is Turning Into a Very Expensive Hotel, Its Latest Visitors Returned to Earth

4 Astronaut on Space Station Takes Control of Rover on Earth, Force Feedback And All

It’s never too late to shoot for the stars. Literally. One man from Turkey who sells fruit and vegetables at a local market but became an Internet star when he accidentally flew a patio umbrella is now hoping to become a real astronaut.
6 photos

Earlier this week, Turkish President Recep Tayyip Erdogan announced that, as part of a national $6 billion space program, preparations had started to find a Turkish citizen that would head to the International Space Station (ISS). The launch is expected to take place as early as 2023, and applications are now open for anyone who’s under 45, has a bachelor’s degree in engineering, natural sciences or basic sciences, and is fluent in English.

This man isn’t checking all the boxes, but he hopes to somehow be able to do so by the time he’s accepted in the program, MEMO reports. He has something no other candidate has: the unofficial title of Turkey’s first astronaut, from an incident in 2019 when he accidentally flew a patio umbrella.

Sadik Kocadalli sells fruit and vegetables at a local market in the Osmaniye province. He was at his job post in 2019 when a tornado hit, and he did his best to try and keep a giant patio umbrella with a wheeled metal base from moving around. He and two other men jumped to secure the umbrella, but he was the only one to step on the metal base as a means to add more weight to it and keep it from rolling around.

Because of this, he was also the only one to be carried off when the umbrella took flight. Kocadalli’s flight was short but very eventful: when he realized that the thing wasn’t coming down but was actually going higher, he jumped. The umbrella came to a stop against power lines – Kocadalli had good timing.

The video of the incident, which you will also find below, went viral, earning Kocadalli the nickname of Turkey’s first astronaut. In a new interview (also below, just in case you speak Turkish), he says he hopes he will actually become one, and head out to the ISS. His friends at the market are backing him up.

“Our President is choosing some of the Turks to go to space,” he says, as reported by the same media outlet. “I also became famous as a flying man. Now I want to go to space, too. It would be good if Mr. President sends me to space as well.”

Kocadalli may lack the degree or English proficiency, but he sure has the right attitude. 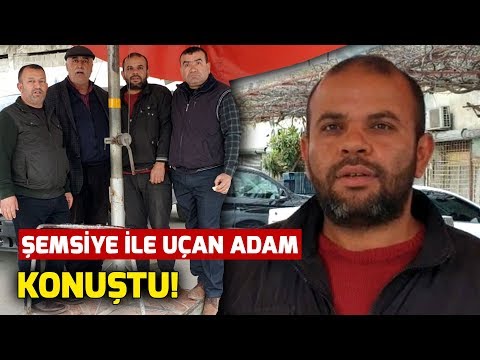