1 How to Fuel Your Car

2 Keep Yourself Safe while Driving Alone

3 Drunken Driver Calls 911 to Turn Himself in
Car video reviews:
Up Next 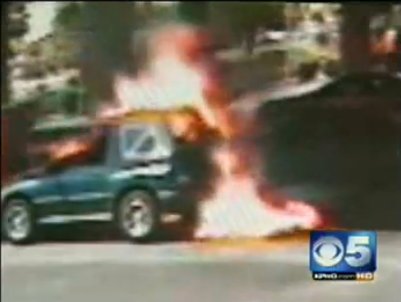 A "don't try this at home"-like incident happened at a gas station in Chandler, Arizona. Four people went through a near death experience, as one of them decided to play with fire while his friend was fueling the car.

After buying cigarettes from the gas station, the guy in question went back to the car and started "joking around" with a match. Seconds later, a giant fireball engulfed the car, as the gasoline fumes ignited.

"He said his friend was just messing around, and evidently struck a match, and that's when everything blew up," Phillip Butler, general manager at the Chevron gas station was told KHPO.

In the video, you can see the driver of the SUV jumping away from the pump to avoid the burning fuel. Moments later, a woman jumps out the car's window and the driver comes back to the car to get the child who was in the back seat of the car. "Thank God they pulled the kid out in time," said Vanessa Nuno, a gas station employee.

As for the guy who started the whole incident, the surveillance cameras at the gas station caught him on tape, running away engulfed in flames, putting the entire gas station at risk. "By the time I got there, the guy was on fire, running around all crazy," cashier Benjamin Gonzalez said. "I didn't want the whole thing going on fire, don't want an explosion in here, you know,"

He survived the incident, but suffered burns on 20 percent of his body and is currently in critical, yet stable condition.