2 Bus Driver Has Fainting Condition, Sues Company After Getting Fired

3 Man Gets Back In Flaming Bus To Swipe Travel Card, Avoids Death And Surcharge

Vlad Mitrache
The world is filled with gender inequality situations, but whenever these two words are spoken together, our brains are hardwired to think it's all about female discrimination.
6 photos

And, just to make it clear from the start, we don't think that's a feminist conspiracy or anything. It's just the natural way for our minds to function considering that is indeed the context it is used 99 percent of the time.

We're here to talk about that one percent, and if you've ever been an employee somewhere, it's probably something you have come across too. It's all about workplace dress code and how the rules differ from one gender to another.

As someone who has always worn shorts to work whenever the temperatures demanded it, it has become something so important to me, that I would discuss it during the initial hiring interview. If there was even the slightest hesitation, I would go through with the interview, but my decision would have been made at that precise moment.

For some reason, male shorts are considered something unsightly. Well, not the shorts in particular, I'm sure, but rather the legs that come from under them. Females, on the other hand, don't have that problem. They might be told to be careful about the length of their skirts or dresses, but nobody ever will forbid them from wearing these clothing articles to work.

Since western Europe is now dealing with a heatwave that has brought record high temperatures, this issue has been brought to attention once again. This time, it was the bus drivers from the French city of Nantes.

Upset that, unlike their female coworkers, the men are not allowed to show up in shorts, a few of them decided to go shopping for skirts and wear them the second day. Despite its crackdown on shorts, Semitam, the bus company these men work for, had no legal way to prevent them from performing their duties.

“A modern approach would allow us to wear long shorts from time to time. Women drivers can wear skirts, but not the men. It's a form of discrimination," said one of the drivers, quoted by The Telegraph, and it's hard to dispute his statement.

The drivers argue that sitting behind a large glass on a hot day like the ones Nantes has seen lately can mean temperatures reach as high as 50 degrees Celsius (122 Fahrenheit). With no air conditioning, that makes it more than just uncomfortable for the driver - it's downright dangerous.

They also say the decision to take such a strong stand on shorts is ridiculous especially since nobody really sees them from the waist down. And, after wearing the skirt for a day, they say the benefits are immediately apparent. "I can tell you that with today's temperatures, it was rather agreeable," Gabriel Magner, one of the protesting drivers, said. 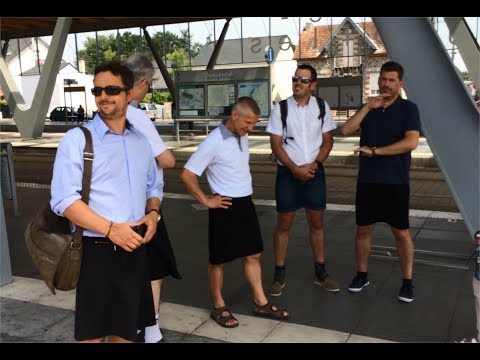