1 Automotive Wiki: Why Are Traffic Lights Red, Yellow and Green?

4 French Pedestrians Free to Cross the Street as They Please

5 Ferrari Revise Traffic Light System for 2009
Up Next

Vlad Mitrache
Traffic lights have probably saved your life more times than you can count, which precisely why you can't really get angry at them for showing red even though there are no other cars around.
5 photos

But even though nobody can dispute their usefulness, they can become quite a pain in the proverbial butt sometimes. However, instead of launching a petition online that calls for the removal of all traffic lights across the globe, a more likely solution to the problem is to know what you're dealing with. As they say, get to know your enemy.

First off there are those lights where you can do whatever you want, and you still won't be able to make them turn green without a spray of paint. There are lights with fixed timing, and even though you might find that hard to agree with when waiting for them to turn green while looking at an empty intersection, they can be quite useful at times. For instance, it's the only way to create the so-called green-waves, where cars traveling at the correct speed can go the whole length of a boulevard without ever hitting red.

Other lights, however, use various sensors to read traffic and make the best decision regarding which direction should be getting the green light. These sensors vary from simple cameras - which are easier to spot - to electric wires buried in the pavement - which are quite obvious as well.

When faced with a camera-equipped traffic light, what you need to make sure is you position your car as far forward as you can, and also try moving it around so the camera detects the motion and realizes somebody's there. Try to think of it as an old man that's half blind and near-sighted and you need to make yourself seen somehow.

The induction loops in the pavement are a little more freaky, and that's because they actually generate a very weak electric current through your vehicle. Don't worry, it's perfectly safe and it won't affect your tinfoil hat, but it's still weird knowing you're passing through a magnetic field that can wreck havoc with the electrons in the metal of your vehicle.

The advice given by SciShow in this situation is to make sure your car sits in the middle of the induction loop - look for the tiny grooves in the asphalt. Motorcycle riders are even encouraged to put down the kickstand to increase the amount of metal closer to the loop, which in turn would generate a more powerful magnetic field.

Of course, if turning red into green is what you're after, there's always the somewhat simpler solution: become a daltonist. Red, green - it'll be all the same to you. 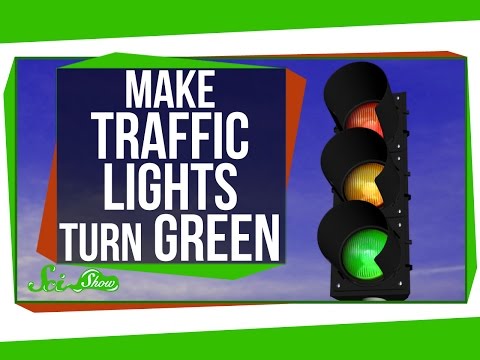