Currently at its third generation, the Jeep Wrangler has been updated several times since the 2007 model year was released. Keeping some details from the past issues the off-roader remains one of the most popular in its segment in the US, with baseball players being quite fond of it still.
5 photos

Eight years ago, the new model brought a complete redesign of the Jeep Wrangler, and also a four-door model. Big changes would define the new car, with the TJ chassis being replaced by an all new JK platform. This next-generation off-roader was noticeably wider than the previous model. As we said, further updates have since been conducted, and select models were designed, but a Wrangler is still pretty much a Wrangler.

This may be one of the reasons most of the people who buy one these days feel the need to get personal with them. Some change the color, others lose the doors, but whatever their choice is it has to be a custom job.

Evidently, being a celebrity implies that everybody is looking at you as an example, at least that seems to apply to fans. In baseball, they have a great passion for off-roaders; everything from Ranger Rover and G-Wagons to Jeep Wranglers and even the Toyota Land Cruiser. This time around, we’re once again visiting the Miami-based Auto Firm shop where Alex Gonzalez took his car for custom touches recently.

After shortly playing for the Detroit Tigers, Gonzales has been on an ongoing search for a new home. That didn’t stop him from making sure he continues to ride in style and with class. The vehicle came out of the shop refreshed more than a month ago, but the boys over at the garage recently released the video they shot when Gonzalez came to pick it up.

In terms of details, you’ll want to know we’re looking at a new pair of custom wheels, a different sound system on the inside and a new interior that will match the satin black with green accents paint. The question here is, do you like it? 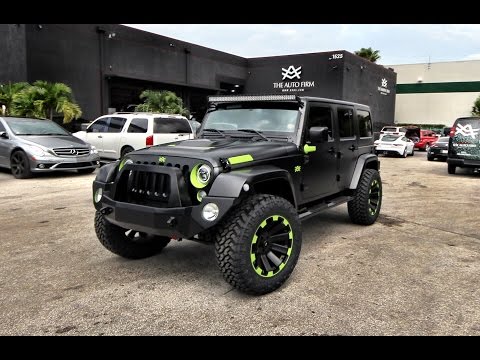