Mad Max: Fury Road is going to go down in history as an awesome movie. We're not trying to be objective or "cinematically correct" since the two hours of non-stop action has mesmerized everybody.
1 photo
However, they need to make a few more movies that are just as good before we start calling this desolate post-apocalyptic landscape a "universe". That's right, we're referring to the best-known science fiction franchise in the world, Star Wars.

I liked some of the movies Lucas made over the years, but I can't say I loved them. There were some cool scenes, like the pod racing in Phantom Menace, but the rest of it looks embarrassing if re-watched in 2015.

Some people have said Star Wars was ruined because they turned it into an outright sci-fi universe, as opposed to a western set in the future. Some people liked the combination of laser guns and dirty bars filled with alien scum. If you're one of those, you will love the next video, titled Road Wars - The Imperator Strikes Back.

Legendary bounty hunter Boba Fett and that disgusting Jabba the Hutt make cameo appearances, together with Darth Vader. But the best part is to watch Charlize Theron use a light safer.

Editor's note: If Star Wars 7 doesn't have a one-armed sexy female sith lord, I will be very disappointed. 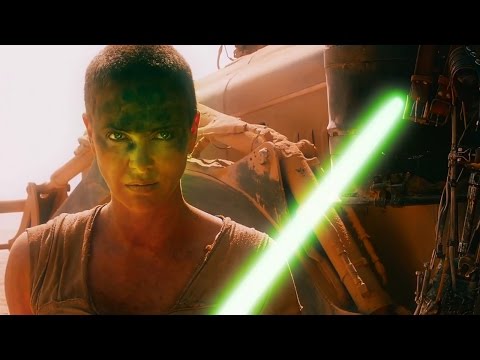