5 Machine Gun Kelly Is Ready for an Alien Invasion, Has Had Several Encounters
Car video reviews:
Up Next

Ant Anstead’s Tipo184 Will Make You Feel a Bit Like Fangio in the U.S. Too

Even among celebrities, Machine Gun Kelly gets to call himself lucky: when his Aston Martin DB11 went missing from his driveway, police were able to recover it in just one week.
30 photos

The recording artist and young fashionista loves cars and motorcycles as much as the next dude, but, unlike most celebrities, he is not yet an avid collector of either. Still, at the end of 2019, as he wrapped up a successful tour, Machine Gun Kelly indulged in a treat on four wheels: a brand new Aston Martin DB11 in a striking and possibly custom purple color.

Again, unlike most celebrities with his money, MGK drove the car quite a lot. Then, at the end of last year, it was stolen off his driveway in Los Angeles. One of his former neighbors told the media at the time that MGK would often park it in his driveway because his garage was full on “junk” and, obviously, because he didn’t think it would attract this kind of attention.

One week later, the LAPD found the car abandoned outside a home after a short pursuit. The presumed thief driving it got spooked when he or she saw the lights from the patrol car, drove it onto someone’s driveway, and then made an escape by foot. The car had minimal damage and was sent to the impound lot before MGK picked it up.

As it turns out, the star had to wait longer for the repairs than he had to wait for the car to be recovered. It’s just now that he’s been reunited with it and, to give you an idea of how special the vehicle is, know that he had cameras film the moment. The Daily Mail says at least one camera crew was on site when the DB11 was delivered to his home.

That same night, MGK took it for a drive to a restaurant on a date with girlfriend Megan Fox. You will find a video of the couple leaving the restaurant in the DB11 below.

In the end, all’s well that ends well. And some celebrities really do love their rides, not just use them as props for Instagram pics. 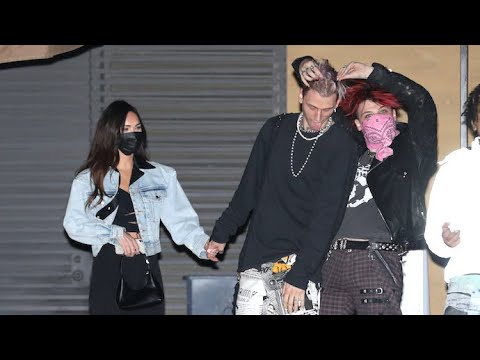 The"regular" Aston Martin DB11 is shown in the gallery.