2 This 1965 Ford Mustang Can Make a Grown Man Cry, Original V8 Somewhere Around

Far more than a typical restomod, this unique custom ride created by the legendary Chip Foose five years ago is a daring yet subtle fusion between a 1971 Mach 1 and a 2010 GT.

Mach Foose: When a Classic and a Modern Mustang Become a Single Piece of Automotive Art

When you own a classic Mustang as well as a modern one, the last thing on your mind is fusing them into a single car. Well, that doesn’t ring true to every enthusiast  of the iconic pony car, and the best example is a mysterious collector from Japan that is known only as Dr. Honda.

While he liked the way his 1971 Mach 1 looked, he was unhappy about the way it was handled, so he often switched to a 2010 GT. The contemporary model was a lot more comfortable and fun to drive, but, for Dr. Honda, it was just not as beautiful as its first-generation sibling.

He often dreamed about a bespoke Mustang that could combine the best of both models and, at some point, decided that the only man who could turn his vision into reality was Chip Foose.

One of the most famous automotive designers and custom car builders on the planet, Foose was intrigued by the project and delivered a set of sketches that blew Dr. Honda’s mind. The latter immediately had the two Mustangs delivered to Huntington Beach, California, where both were stripped down to the bare metal and masterfully fused.

As you can see, the bulk of the bodywork came from the ’71, but it received extensive modifications to snuggly fit on the ’10 chassis, which also had to be revamped and lengthened.

In typical Chip Foose fashion, many components used for this ambitious project didn’t come for the two donor cars. The front wheel openings were reshaped to accommodate ’70 Mustang fender flares, the hand-fabricated grille was adorned with a chrome molding taken from a ’69 Camaro (the blasphemy!), but it was slightly modified and flipped upside down. Underneath it, Foose incorporated a pair of driving lights from a ’70 Plymouth ’Cuda and finished the front end off with a custom bumper that replaced the Mach 1’s prominent splitter.

Moving on to the rear, the quarter panels were also sourced from a ’70 Mustang, whereas the taillight panel that featured the Mach 1’s original filler cap in the middle came from a ’69 Camaro. Another non-Ford component was the Chrysler Sprinter rear window that was flawlessly integrated into the widened design.

The fusion between the two Mustangs becomes more apparent inside. The modern model’s dash, steering wheel, seats, and center console were all modified to fit inside the ’71 body to such an extent that you feel teleported into another car. Foose designed the door panels and integrated a slight retro touch by fitting Porsche 356 door pulls.

At the heart of this unique vehicle stood the GT’s 5.0-liter Coyote V8. Dr. Honda didn’t want to have it tuned, but this didn’t mean it was left untouched as the famed designer detailed several components to give the powerplant a unique look.

Sitting on Foose Design one-off 20-inch wheels, wrapped in Pirelli P Zero tires, the revamped pony car was finished in a bespoke gray metallic paint. The project was completed in 2017, and before it was sent to Japan, it took center stage at SEMA. You can watch footage from the event in the video below posted on YouTube by ScottieDTV.

Foose was tasked with subtly blending the best of both ‘Stangs in a vehicle that looked more like a production car than your typical restomodded custom, and boy, did he deliver! The car is instantly recognizable as a 1971 Mustang, but once you look closer, your mind will be blown by the abundance of bespoke features. 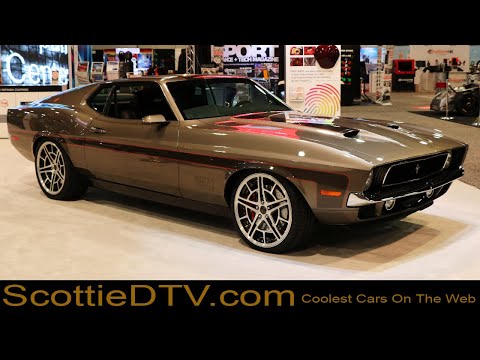