When looking for casual sports cars that can take you to the movies after a hard day’s work and then to the track during the weekend, there’s good judgment to search some German and British automotive addresses. Of course, after selecting your favorites, you could be in the dark as to which one has the upper hand on the track. If those hot choices are the M2 CS, Exige 410 Sport, and the Cayman GT4, here’s the quickest lap answer.
34 photos

The trio was rounded up by the German “sport auto” YouTube channel for a lap shootout around the Hockenheim GP racetrack. As far as we can tell – although not expressly mentioned - it’s the same driver behind the wheel (note that for later). And a clear favorite to win the battle... But, on the other hand, there are also some differences to discuss beforehand.

First of all, tires always have an impact on the exhibited performance of a car. After all, they’re the one element connecting the machine and the surface of the tarmac. On this occasion, there’s nothing to call down on them – the GT4 has a set of Michelin Pilot Sport Cup 2 N1’s, while the other two are very close with regular Cup 2s.

Next up comes the power level, of course. In theory, the Bavarian representative has the upper hand here – the M2 CS arrives with an output of 450 ps, while the Cayman GT4 comes second with 420 ps, and is followed closely by the Brit with 416 horsepower. But there’s another big catch. And it’s one that sets the course for the match outcome.

Both German contenders have a clear advantage from the get-go because they sport automatic transmissions as opposed to the Exige 410 Sport's stick shifter (a great-looking one of the naked type). And the user comments are not exactly praising the performance of the driver with it, either...

Well, nothing in life is perfect – and nor is this track battle. But it does come with a great point in its favor – just like other such encounters from the channel, there’s no audio comment over the laps. That’s great for two reasons – we love hearing the engines roar on the track, and sport auto knows very well that not everyone knows German. 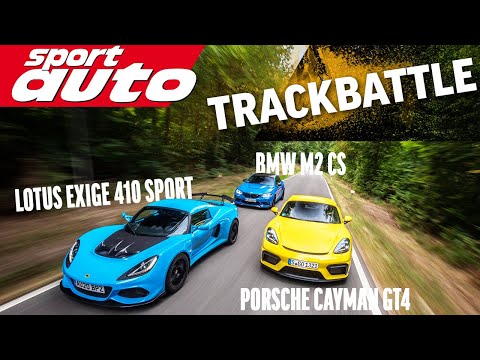