4 Reinvent Your Seaside Vacations With the Warm, Cozy Beachy Trailer

Cristian Curmei
What makes a trailer one that will make you smile every time you see it? The more people you ask, the more answers you’ll receive. However, in the furthest reaches of Mother Russian, one team seems to know exactly what you want.
29 photos

So, there’s this crew out in Russia, named Luxury Form, and one product they manufacture is known as the Air trailer. Now, about Luxury Form, the internet is pressed hard to find much information. But, judging by the look of their website, it would seem as though they’ve been in this business for quite some time. I mean, just look at what’s on your screen now.

The Air isn’t the sort of trailer meant for camping in the sense that it includes a bed or storage for things like underwear; it doesn’t. What the Air is really meant for, is to be your perfect vehicle garage. Inside, there’s room for up to two motorcycles, depending on their style, or a large ATV, a snowmobile, or a jet ski. Heck, if you’re creative and handy enough, I'm sure you could transform the camper into a living space. Although, some might call that a dang shame.

What attracted me to the trailer, aside from its exterior design, is the shape it takes on as it’s ready to deliver your goods. When you’re ready to access your vehicles or tools, the top and sides of the Air lift and break up into three distinctive panels, each one on a hydraulic spring system.

Not only are these panels composed of fiberglass, making them light, flexible, and rigid enough to take a hit or two, but the hydraulic system also features an integrated rack system meant for storing tools and hardware you may need for an eventual emergency. Another idea, since plenty of room is available, just use some of the space to pack whatever camping gear you have in mind.

One feature that shows just how our Russian brethren like to live their lives, is the flooring. Not only is this flooring able to take a beating, but because it’s made from aluminum panels, cleaning should be nothing more than a hose-down and a scrub with a broom.

The lip or lid found at the rear receives the same aluminum flooring. Why? Simple. This lid will also be used as the loading ramp for your vehicles; it’s bound to get just as dirty as the rest of the trailer.

If you’ve fallen in love with this mobile garage, guess how much you’re going to have to dish out just to own one? No idea? Well, the manufacturer’s website shows a starting rate for an Air equipped with the most basic features as running for 990,000 Russian Rubles. But, before you lose your mind at these six figures, know that this equates to just $13,303 at current exchange rates. Sounds like a lot of people’s prayers have just been answered.

And now for the bad news. I’m not going to lie. Currently, Luxury Form does not show that they are willing to ship outside Russia. So, if you do happen to give them a call after reading this article, be prepared to pay a whole bunch of taxes in shipping and border controls, if they even agree to send one to you. It’s possible you may need to show up in person in order to even claim your prize. Once you do, I beg of you to stop by Bucharest, Romania, just so I can touch it, take a few photos, and write an article about you and how the article you just read got you to travel to Russia... for a trailer. Any takers? 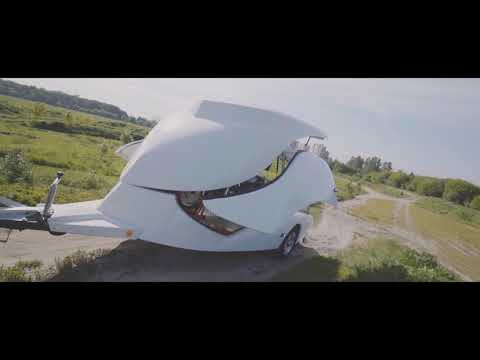