5 Columbus’ Dragon Is a Beast of a Yacht With Glass Elevator, Waterfall and Grotto
Car video reviews:
Coverstory

One of the greenest megayachts ever built is on the market for a new owner, just weeks before being delivered to the first one. Luminosity from the Benetti yard in Italy boasts 6 decks, hybrid propulsion, eco-friendly commitment throughout, and comes with the promise of unparalleled (green) luxury.

Luminosity Is One of the Greenest Superyachts Ever Built, Now Up for Sale

Luminosity was officially launched in February 2019 but it was supposed to be delivered to the first owner this spring. Mere weeks before that happened, it was jointly listed for sale with Fraser Yachts and Burgess, with an asking price of €225,000,000, which is the equivalent of $224 million at the current exchange rate.

Currently receiving the finishes touches in Italy, at the Benetti shipyard, Luminosity was designed with the goal of being one of the greenest megayachts on the ocean. Design and construction took years for that same reason, and it’s usually standard procedure for an owner to have to wait an average of 5 years before sailing away in a new vessel of this type. Whoever has $224 million to spare will be able to do so right away.

With 6 decks and a staggering interior volume of 5,844GT, Luminosity is 352 feet (107 meters) long and comes packed with luxury amenities. As is to be expected of a vessel selling for this kind of money. However, Luminosity stands out for the builders’ focus on being environmentally-friendly, which is apparent throughout, from the hybrid propulsion system to the way it aims to incorporate natural elements into luxury finishes.

The exterior represents a joint collaboration by Azure Naval Architects, Reymond Langton Design, Zaniz Interiors and Giorgio Cassetta, while the interior has been done entirely by Zaniz Interiors. The Luminosity comes with almost 9,000 square feet (836 square meters) of glazing, either as floor-to-ceiling windows or skylights. The mega yacht is flooded with natural light, hence it name.

The interior gives going “green” a figurative meaning as well, through a floating glass staircase that is surrounded by interactive displays and “e-flowers” that open when they detect motion. It’s not as thrilling an experience as walking through an actual forest, but it’s the closest thing – and a very impressive one, at it, considering it’s happening smack in the middle of the ocean. You can see how this interactive forest area looks like in the video available at the bottom of the page.

The Luminosity can accommodate a total of 27 guests in 12 staterooms and the master suite, and an additional 37 crew in separate quarters. The owner’s suite comes with its own deck and private terrace, and separate office.

Amenities range from commercial-grade helipad (with refueling station) to the best in terms of wellness, including a state-of-the-art health club slash beach club, with a steam room, fully-equipped gym, cold plunge pool and counter-flow pool. The counter-flow pool can turn into a dance floor at the touch of the button, so the entire area can serve for nightly entertainment.

Other amenities include a hospital, a conference room, a moon lounge, a cigar room, an actual flower room, a wine cellar, a bar, a custom-built guest elevator that services all decks, open fireplaces, and a whirlpool. Because no one said going green means compromising on the good life.

The Luminosity is being sold with all the current owner’s tenders on board (which he has never used, since he decided on selling the megayacht before delivery), and includes a total of 12 cranes for additional toys and to service the main-deck garage loading bay.

Sure, a quarter of a billion dollars is a lot of money in this any economy, but then again, the Luminosity was not built with the average seafarer in mind. Only the richest and most willing to ease their conscience on the topic of pollution caused by cruising need apply. 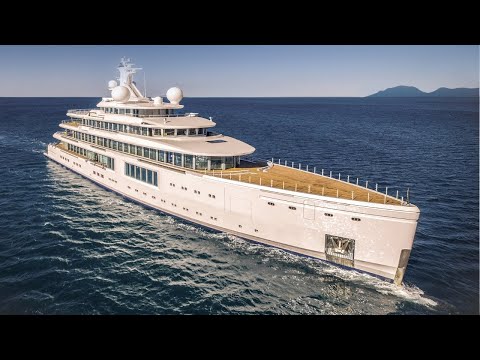