4 Check Out AMP-1, That Special Place the Lucid Air and Gravity Will Call “Home”

5 The Lucid SUV Gets a Name: Project Gravity, Will Go Into Production in 2023
Car video reviews:
Up Next

MyPod Teardrop Camper Covers All the Essentials Despite Its Minimalist Approach

Lucid Motors is shaping up as a worthy opponent for Tesla, with the startup getting ready to become a public company and also following in the footsteps of Elon Musk’s well-known tardiness with its own delays for the upcoming Air.
22 photos

According to Peter Rawlinson, Lucid’s CEO, the hard decision to postpone deliveries has already been taken because of the numerous hardships everyone’s been through over the past year or so. As such, reservation holders won’t be getting their brand-new $161,500 Air Dream Editions this spring.

The company announced that reservations have closed on this flagship launch model, which is great news for them because it means interest has been high on an EV that’s utterly pricey and still untested in the real world.

On the other hand, now we know that Lucid is pushing the envelope as fast as it can to kick off series production sometime during the second half of the year. That doesn’t mean there are no Airs being made at the Lucid AMP-1 factory in Casa Grande, Arizona. After all, the CEO himself recently drove the newest “release candidate vehicle.”

Because the company usually provides interesting behind-the-scenes glimpses of its operations or proprietary technology, Lucid has recently released footage taken inside the factory's general assembly area. Fresh out of the paint shop, it’s where the body meets its heart and soul, the powertrain, and also receives all the cabin innards before undergoing a final check up by the quality assurance team.

As always, it’s interesting to see what happens during the process, and it seems that Lucid has found a way to reunite both high-end automated manufacturing and the traditional craftsmanship delivered by expert human touch.

Hopefully, Lucid is going to surpass Tesla at least in one area: quality. We all know very well the stories about Musk’s trials and tribulations in this area, so we’d like to see a company learn from a competitor’s past issues and mistakes. For now, let’s hope the 180-attribute inspection will be enough for the Lucid Air. 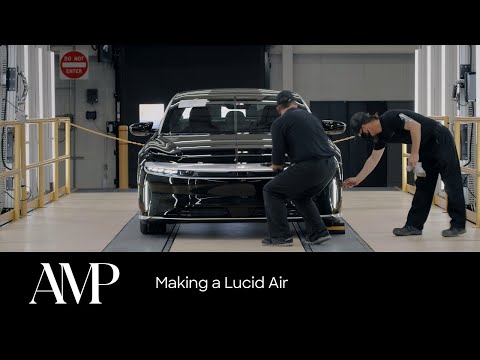