1 Lucid Air to Be Backed by 20 Sales and Service Locations Across the U.S.

Lucid Air to Have Highest Ever EV Range at 517 Miles, Independent Test Finds

Almost four years since Lucid Motors first unveiled the Air electric sedan, we are fast approaching the September 9th official unveiling and the company is adding another piece to the puzzle. This time around the startup is looking to dethrone Tesla Model S' comfortable position at the top of the range list - since June, the North American-flavored Long Range Plus achieved an EPA rating of 402 miles, the first electric vehicle to ever cross the 400-mile mark.
27 photos

Now here comes Lucid Motors to signal this might be just dust in the wind displaced by Air’s own rating. The incipient U.S. automaker has recently revealed the impressive results gathered by an independent testing body - the FEV Vehicle Development Center in Auburn Hills, Michigan. And they are beyond impressive – they are close to borderline sci-fi: 517 miles (831 km) on a single charge.

The results seem as official as they get, given that Lucid Motors itself ordered them and also came with the footnote that “this new benchmark range was secured with FEV North America, Inc. in Auburn Hills, Michigan, applying the EPA’s Multicycle Test Procedure (SAE J1634 Oct 2012 Standard) with the standard adjustment factor.”

We still have no idea about the size of Lucid Air’s battery pack – Peter Rawlinson, CEO and CTO of Lucid Motors, is only saying that he is “delighted that the Lucid Air has been independently verified by FEV to achieve an estimated EPA range of 517 miles, and that this landmark in the history of EV development has been achieved entirely through Lucid’s in-house technology.”

Even now he is just short of giving exact specifics but let slip one important figure – the Air's powertrain system has been designed to work at 900V, the highest EV voltage to date. Today most electric vehicles are in the 250 to 400V DC system and some – like Porsche’s Taycan – are just upgrading to 800V. 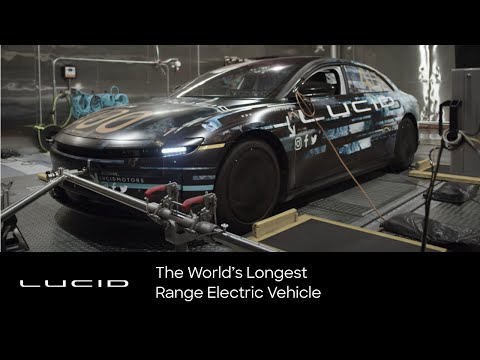