3 80-Year-Old Races Tuned Dodge Hellcat Like There's No Tomorrow, Gaps Them All

Born in 1981 for the 1982 model year, Chevrolet’s third Camaro marked a stark departure in styling from the previous generations and nailed a lot of firsts for the series. Naturally, the F-bodied pony didn’t lose its appetence for extensive trips and amateur racing, although it probably didn’t undertake both at the same time.
32 photos

Another three generations have passed over the series since then, but the decade-long third iteration has its own cult following, just like many other American automotive icons. Some fans have them fully original and in classical mint conditions, others like to give them modern updates to ensure daily usability, and a select few have them ready for just about anything.

Let’s take this white 1986 unit, for example. 500-mile road trip? No problem. A little drag racing for timeless quarter-mile glory in the low eights? Sure, it’s got that covered as well. Both at the same time? Yeah, and we’re not joking.

Caught during a few quick attempts at the Byron Dragway in Byron, Illinois by the Race Your Ride YouTube channel is Scott Klepinger's Camaro from 1986 (according to the description). Apparently, the Chevy took part in Byron Dragway's Drag Weekend 500, an event that sees all cars embark on a 500-mile (805 km) road trip from Byron in Illinois to Rock Falls Raceway in Wisconsin, then back to Byron for the actual quarter-mile performance.

With its unassuming white paint job and rather stock design, you wouldn’t think much of this Camaro at first glance, but that would be a major oversight, truth be told. Instead, once the LSX-swapped machine clears its 98-mm Precision turbo voice and takes off, the mystery gets cleared off in a few seconds.

Actually, about eight of them are needed for the traditional quarter-mile standoff, as this 427ci (7.0L) monster will make consistent low-eight second passes all day long, it seems.

We get to see a few of them in the video embedded below, with the best run stopping the clock at 8.02 seconds with a 169-mph (272 kph) trap speed. In the end, we have just one regret: not seeing the Camaro gap something cool, as most passes are performed solo. 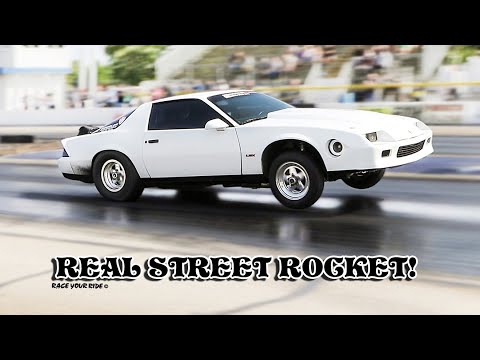